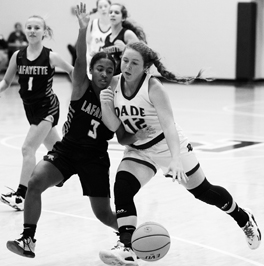 Photo contributed by Rusty Cooper
Ali Thompson drives past a defender in last week’s game against LaFayette. Thompson scored a total of 18 points in the two games last week.

On Tuesday, they opened play against Heritage High School and both teams struggled to get back in the grove after the Christmas break.

Only 11 points were scored in the first quarter and the Lady Wolverines found themselves behind 7-4 after the first eight minutes of play.

The shooting woes continued for Dade in the second quarter, managing just six points, and at the end of the first half trailed, 18-10.

The third quarter was better for the Lady Wolverines as they scored nine points while Heritage struggled and managed just three as their lead was cut to 21-19.

The fourth quarter saw the Lady Wolverines continue to struggle on offense as Heritage pulled out a 36-29 win.

Ali Thompson led the Lady Wolverines with 11 points and Stella Henry saw her first action of the season due to an injury and scored eight points.

The Lady Wolverines faced Ridgeland on Dec. 30 and came away with an easy win.

They jumped out to an early lead and at the end of the first quarter were up 17-3.

They continued to dominate play in the second quarter and at the end of the first half held a comfortable lead, 27-9.

The second half would be more of the same as Dade, still struggling at times to score but defensively played really well, built their lead to 38-15.

In the fourth quarter Ridgeland managed to score in double figures for the first time in the game but it was too little too late for them as the Lady Wolverines outscored them 16-13 and came away with a big 54-28 win.

Results for the Lady Wolverines final tournament game was not available on Hudl at press time and a summary will be in next week’s Sentinel.

This week the Lady Wolverines traveled to Model on Tuesday and then hosted Coosa on Friday in a pair of Region 7-AA games. On Saturday afternoon they will travel to North Sand Mountain to face the Lady Bison with the junior varsity game starting at 2 p.m. and the varsity tipping off at 3:30 p.m.