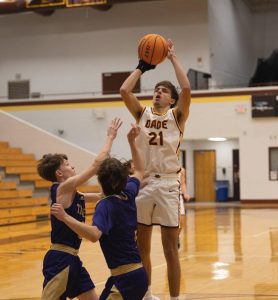 The Dade County High School baskerball teams only had one game last week due to COVID and the flu.
On Tuesday afternoon the Wolverines hosted Valley Head in a rematch of an earlier game won by the Wolverines at Valley Head.

Dade took the opening tip and controlled the game from the beginning, jumping out to an early double-digit lead and never looking back.

By the end of the first quarter the hot shooting Wolverines had rung up thirty-two first quarter points and built a commanding 15-point lead, 32-17.

The Wolverines slowed down a little in the second quarter but still managed to build on their lead, outscoring the visitors 19-11 and at the end of the first half had a commanding lead, 51-28.

Dade started the second half like they did the game, this time pouring in twenty-eight points to just eleven for Valley Head and built their lead to 79-42 heading into the fourth quarter.

With a running clock in the fourth quarter, the Wolverines still managed to score twenty-two points while Valley Head managed just nine, and the Wolverines came away with a big 101-51 win.

Ten Wolverines scored in the game with Levi Moreland leading the way with 21 points followed by Max Howard with 18, Everette Christiansen with 17, and Connor Wilburn with 12.

This week the Wolverines and Lady Wolverines will be back in action in the Gordon Lee Tournament.