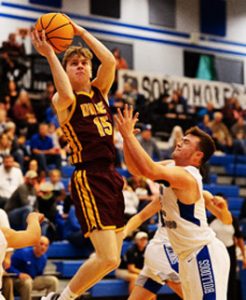 Photo courtesy of Rusty Cooper
Max Howard keeps his focus on the basket in last week’s game against the Trion bulldogs.

It was not a good night for the Wolverines as they found themselves in foul trouble early in the game and had to battle for everything they got the entire game.

Playing hard Dade managed to keep the game close, as it was seldom more than three points difference through three quarters.

In the fourth quarter it all came apart for the Wolverines as they could not get their shots to fall and with just over four minutes remaining was down to just four players eligible to play. They got outscored 18-1 in the fourth quarter and dropped the game 59-40 after being down just two points at the end of the third quarter.

The Wolverines were called for 26 fouls in the game to just 16 for Southeast.

Brodie Swader led DCHS with 11 points while David Cole and Levi Moreland finished the night with seven points each.

The Wolverines traveled to Trion Friday to face the Bulldogs. They jumped out to a big lead early and controlled the game as they shook off the Southeast game and moved forward.

It was more of the same in the second half as Dade continued to play well in the third quarter, outscoring the Bulldogs 19-10 to head into the fourth quarter up 54-32.

The Wolverines coasted in the fourth quarter and claimed a big 66-50 win over the Bulldogs to improve to 2-1 for the season.

Brody Cooper led the team with 15 points, Everett Christianson with 13 points and Max Howard and Brodie Swader with 11 points each.

This week the Wolverines played at Southeast Whitfield on Tuesday and then will host Pepperell on Friday night in the first Region 7-AA game of the season.