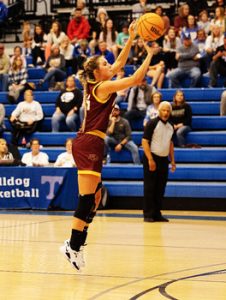 Photo courtesy of Rusty Cooper
Kami Counts goes for three for the Lady Wolverines in last week’s game against the Lady Bulldogs.

The Lady Wolverines scored 22 first quarter points to take a commanding lead, 22-3 and never looked back.

By the end of the first half Dade was up 32-7 and it did not get better for the visitors in the second half.
Getting everyone in the game in the second half the Lady Wolverines coasted, leading 42-13 after three quarters and then closing out the game and claiming the win 54-19.

Ali Thompson led the team with 17 and Emma Heard with 10 points. In all eight Lady Wolverines scored in the game as they picked up their first win of the season.

The Lady Wolverines traveled to Trion last Friday night to face the Lady Bulldogs in another non-region game as they prepare for region play that starts this Friday night at home against Pepperell.

The game started slow as defense dominated play and at the end of the first quarter the host team held a one-point lead, 7-6.

In an exceptionally low scoring first half Dade managed just seven second quarter points but that was enough to take a one-point lead at the end of the first half, 13-12.

The third quarter was more of the same, but this time the Lady Bulldogs nine points, which was enough to tie the game 21-21.

It was a tough loss for the Lady Wolverines who were led by Emma Heard with 13 points and Kami Count with 10 points.

This week the Lady Wolverines traveled to Southeast Whitfield Tuesday and will host Pepperell on Friday in the first Region 7-AA game of the year. Friday’s game is set to begin at 6 p.m. They will travel to Ridgeland High School on Saturday with that game set to start at noon.