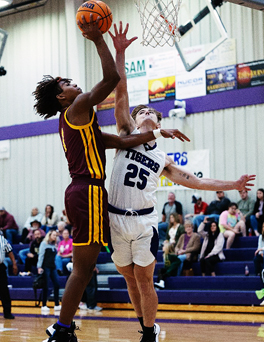 Photo contributed by Rusty Cooper
David Cole goes up for a basket last week against the Valley Head Tigers. Dade came with a big win over the host team 73-27 in their season opener.

The Dade County High School Wolverine basketball team tipped off the 2021-2022 season last week when they traveled to Valley Head, Ala., to face the Valley Head Tigers.

The Wolverines had not been able to get a lot of practice time in since the football team advanced to the playoffs and several of the basketball players also played football.

That did not seem to bother Dade however as they quickly jumped out to a big lead over the host team. It was Valley Head’s first game of the season as well.

By the end of the first quarter the Wolverines had built a 13-point lead, 23-10, and really were never challenged after that as the Tigers were totally out matched.

A big second quarter saw Dade continue to build on their early lead and by the end of the first half they were up 49-20.

Following the script from last season the Wolverines played a dominating third quarter, outscoring the Tigers 24-7 and heading into the final quarter were up 73-27.

Dade coasted in the fourth quarter and came away with a big season opening win, 86-40.

The Wolverines were led by senior Everett Christiansen who rang up a career high 26 points hitting 12 of 19 shots from the floor and was perfect from the free throw line.

Junior Brodie Cooper scored 13 points, while Brodie Swader and Levi Moreland scored 10 points each.
Nine Wolverines saw action in the game and all nine scored in the team’s dominating performance.

The Wolverines were set to play their first home game of the season on Tuesday night when they hosted Southeast Whitfield and then will travel to Trion on Friday, Dec. 3.

DCHS opens Region 7-AA play at home on Friday, Dec. 10 when they host Pepperell and then travel to Southeast Whitfield on Tuesday, Dec. 7.