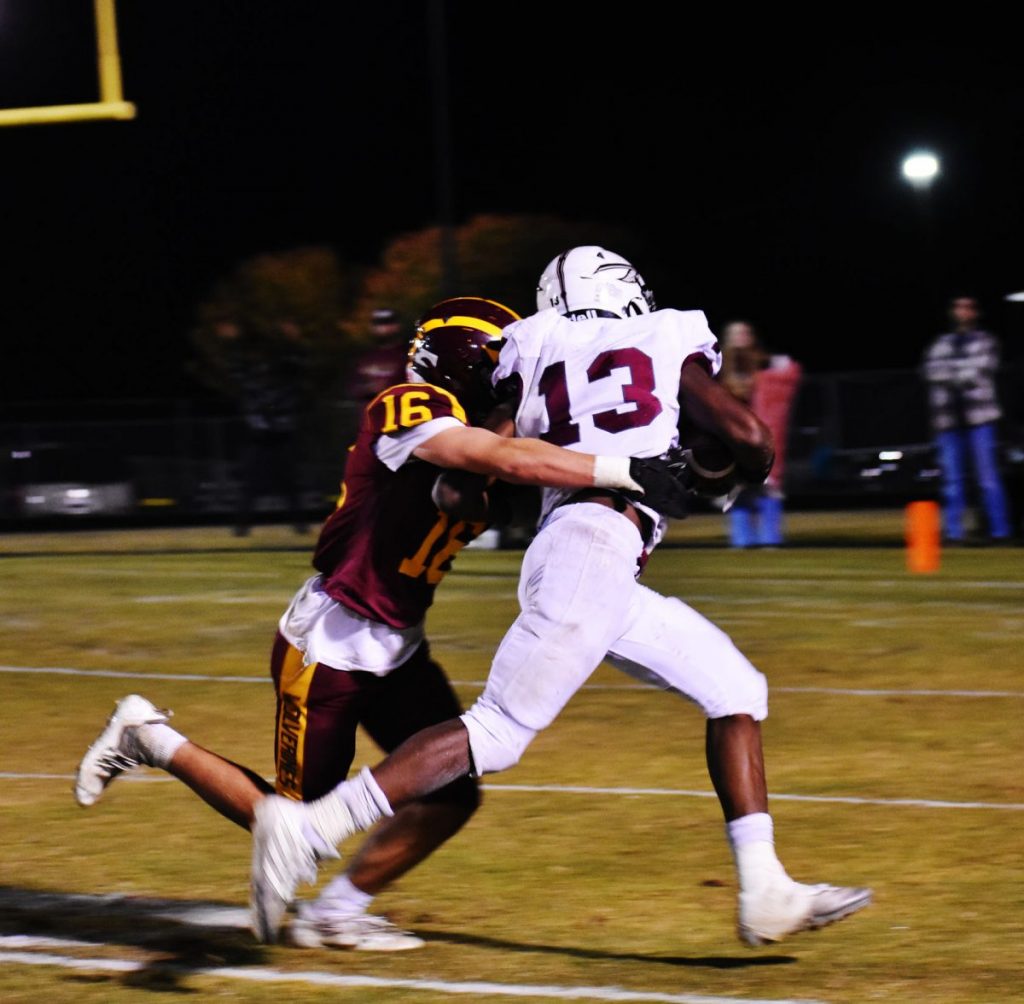 EDDY GIFFORD/Dade County Sentinel
Dylan Dwyer had a big night for the Wolverines on defense with three tackles and two assists.

The Dade County High School Wolverine football team hosted Heard County last Friday night in the first round of the state playoffs, Dade’s first appearance in five years and the first home playoff game in much longer than that.

The large crowd got their money’s worth as the two teams battled toe-to-toe for four quarters in the hard fought game to see who would advance to the next round of the playoffs.

Heard County took the opening kick and put together a long drive that ended on a nine-yard touchdown run with 8:50 remaining in the first quarter. The extra point kick was good, and the visitors had a 7-0 lead.

Dade struggled on offense early but late in the first quarter Brodie Cooper threw to a wide-open David Cole for a 75-yard touchdown that cut the lead to 7-6. The extra point was missed, and the Wolverines trailed 7-6 with 1:13 remaining in the first quarter.

Early in the second quarter Heard County found the end zone again, this time on a 27-yard run but the Wolverines blocked the extra point and Heard led 13-6.

Dade put together a long drive midway through the second quarter and with 4:43 remaining in the first half Cody Williams scored on a two-yard run. The Abigail Tremmier kick tied the game 13-13.

Just before the end of the first half Heard put together a drive that ended on a nine-yard touchdown pass and the extra point gave them a 20-13 lead with nine seconds remaining in the first half.

The Wolverines, as they have done all year, fought back and with 6:57 remaining in the third quarter Brodie Cooper threw a 13-yard touchdown pass to Cody Williams. The extra point kick by Abigail Tremmier was good and the Heard County lead was cut to 26-20.

On Dade’s next possession, they drove down the field again against the Heard defense and with 4:26 remaining in the third quarter Cody Williams ran through a couple of tackles on his was to a 26-yard touchdown run to tie the game 26-26. The Abigail Tremmier extra point kick was good, and the Wolverines had their first lead of the game 27-26.

The two teams battled back and forth, as neither team was able to make a serious threat until Heard County put together a late drive and scored on a one yard run with 2:25 remaining in the game to take the lead 32-27. They attempted a two-point conversion but the Wolverine defense stopped them cold, and the score remained 32-27.

DCHS got the ball back but was unable to score and Heard County claimed the hard-fought win by the final score of 32-27.

The Wolverines played their hearts out and deserved to win but it was not to be as their season came to an end, finishing 7-4.

Coach Jeff Poston had high praise for the Wolverines and fans after the game saying, “I am so proud of our football team. We played our guts out, and we proved we can play with any double A team in the state. You cannot find a single point during this season where we did not finish a game. When we got the ball back with a little over two minutes left, I thought we were going to win the game. What makes me the proudest is that so did everyone in the stands. The community really supported these kids this year, and the kids made them proud. We may not have accomplished out ultimate goal, but this team represented the Dade County community every single week with class, with fight, and with pride. I want to thank the community for packing the stands. I want to thank the parents for allowing their kids to be pushed, and I want to thank the kids for buying into something bigger than themselves.”

Congratulation to the Wolverines players, coaches, and students for a great season.