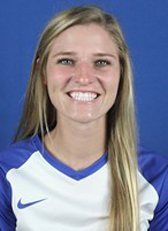 Burrell becomes the first conference player of the year for Covenant women’s soccer since 2006 and the fifth all-time.

Burrell earned All-USA South honors for the fourth time in her career. The senior produced the best offensive year the program has seen in the NCAA era as she led the Scots, the USA South, and ranks sixth in the nation with 18 goals. Burrell leads the USA South with 39 points and ranks 10th in Division III in that category. Her seven game-winning goals this season also leads the conference.

Burrell has six multi-goal matches this year, including her first career hat trick that came in an 8-0 win over Wesleyan on Oct. 16. The senior scored in six straight contests from Sept. 18-Oct. 5 and registered 10 goals against USA South foes. She also eclipsed the 40-career goal mark earlier this season.

Burrell’s 18 scores are the most for a Scot in a season since Kalie Estrada set the single-season program record with 24 in 2005.

Andrew Mindeman is the Director of Athletic Communications for Covenant College.