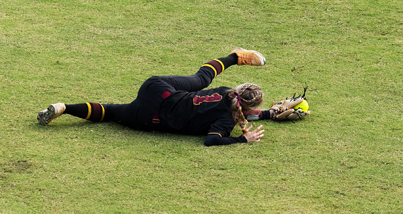 The Dade County High School Lady Wolverine softball team traveled to Columbus last week looking to being home a state championship. DCHS made the trip to Columbus for the Elite Eight where the three-day tournament for all eight Georgia High School classifications is held at the same time. It is a big event with all the schools having the opportunity to show their skills as they all shoot for that elusive championship.

This was the first trip back to Columbus for the Lady Wolverines in a while. Dade brought home the state title in 2004 and again in 2012 but it wasn’t to be this year as the team fought hard but ran into a really good Heard County team, who eliminated them last year, and another really good Vidalia team.

The Lady Wolverines represented themselves, the school, and the community well coming home with a third-place finish in Class AA.

Congratulations to the Lady Wolverines and coaches on a great season and a strong showing in the state tournament!

Here are the highlights of the four tournament games.

Dade then came to bat and with one out Union intentionally walked Ali Thompson and after another walk retired the Lady Wolverines without a run.

Warnock settled down in the second inning with the only base runner reaching on an error and the score remained 0-0.

In the bottom of the second Raegan Page doubled and scored the Lady Wolverines first run on a single by Emma Heard to take a 1-0 lead.

The Lady Wolverines then added a single run in the fourth and fifth innings to go up 3-0.
In the top of the sixth inning Union County rallied for two runs on two hits, and an error to cut the lead to 3-2.

Dade quickly responded with two of runs of their own in the bottom of the sixth when Stella Henry led off with a double, Thompson was intentionally walked for the third time in the game, and both scored on sac flies to put them up 5-2.

The Lady Wolverines then held Union scoreless in the top of the seventh and picked up their first win of the tournament 5-2.

Alyssa Wilson and Page lead the Lady Wolverines with two hits each.

Friday morning DCHS faced off against Bremen in what turned out to be a classic game. Bremen took the lead in the top of the first 1-0 on a long home run but the Lady Wolverines came back in the bottom of the first and scored three runs to lead 3-1.

The Lady Wolverines came to bat in the bottom of the seventh down 6-4. Kaitlyn Stinnett led off with a single. Olivia Tierce then hit a home run to tie the game 6-6 and that was followed with singles by Wilson, Page and Heard. It was then Thompson’s turn at the plate. Coach Stephen Graham had moved Thompson to leadoff to cut down on opportunities to walk her, and she responded with a grand slam home run and a huge 10-6 win, scoring six runs in the bottom of the seventh.

Warnock picked up the win while Thompson had three hits, four RBIs, and scored two runs. Kami Counts had two hits, Stinnett had two hits, Wilson had two hits and Tierce had one hit, and three RBI’s.

The win put the Lady Wolverines in the winner bracket finals on Saturday morning.

On Saturday the Lady Wolverines faced off against Heard County, the defending state champion. It turned out not be Dade’s day as Heard County took the lead in the first inning 1-0, added a run in the second to make it 2-0 and then put it away in the third when they scored six runs to go up 8-0.

Warnock took the loss with Maddie Cuzzort pitching two innings of relief. Wilson had two hits for the Lady Wolverines.

On Saturday afternoon the Lady Wolverines were back on the field and this time they were playing to stay alive in the loser’s bracket, facing off against Vidalia.

Vidalia scored first picking up a run in the top of the first inning to take the lead 1-0.

Dade struggled to get base runners against the 30-win team and heading into the third inning still trailed 1-0.

In the bottom of the fourth DCHS rallied for three runs on just one hit. Three walks and an error but put them back in the game 8-3.

The Lady Wolverines would score again in the bottom of the fifth but that would be it as they fell to Vidalia 8-4 and their dream of a state title came to an end.

Warnock took the loss but had a great sophomore season. Henry had two of the Lady Wolverines’ three hits in the game.

Congratulations to all the Lady Wolverines and coaches on a great season. Looking for big things again next year!