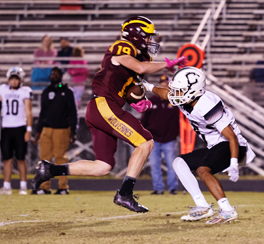 They are currently third and the top four teams qualify for the state playoffs.

A large crowd was on hand to cheer on the Wolverines, and they did not disappoint scoring on their first drive when Brody Cooper threw to Brodie Swader for a four-yard touchdown. The Caroline Tremmier kick was good, and the Wolverines were up 7-0 early in the first quarter.

The teams then exchanged possession and the first quarter ended with the Wolverines up 7-0.

Dade’s defense kept the Eagles in check not allowing them any serious chance of scoring in the second quarter.

Just as the first half ended Brodie Cooper again found Brodie Swader, this time for a 15-yard touchdown pass. Abigail Tremmier kicked the extra point and Dade went to half-time up 14-0.

The Wolverines came out in the second half with the defense continuing to dominate Coosa and the offense playing with confidence and controlling the game.

With 7:32 remaining in the third quarter Brodie Cooper threw to Cody Williams for a 13-yard touchdown. The Caroline Tremmier kick was good, and the Dade team led 21-0.

Just before the end of the third quarter, with 51 seconds left, Brodie Cooper threw his fourth touchdown pass of the game, this time to Zeke Wheeler for 40-yards. Abigail Tremmier kicked the extra point, and the Wolverine lead was 28-0.

Dade’s defense would give up the only points of the game in the fourth quarter when the Eagles scored on a 33-yard pass. The extra point try was no good and the Wolverines’ lead was 28-6.

DCHS would score again with 1:02 remaining in the game when Brodie Cooper ran in from nine-yards out and Caroline Tremmier kicked the extra point to give the Wolverines a 35-6 win.

Coach Jeff Poston stated, “I felt the last few minutes of the first half, and the entire second half was the best offensive football we have played this season. I feel like a light came on for Brodie Cooper, and I am extremely excited to see how good we can get offensively the next couple of weeks.”

This week the Wolverines will be traveling to Calhoun to face Gordon Central and next week will make the long trip to Blue Ridge to face Fannin County.

Heading into the final two game of the regular season the Wolverines still have a shot at a region championship with help but will definitely finish second or third assuring them a spot in the playoffs. A second-place finish would be big since they would host a first round game.

Either way this has been an exciting season for the Wolverines and Coach Jeff Poston and his staff are to be commended for their hard work and dedication.