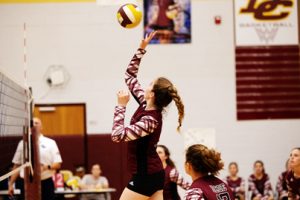 Photo courtesy of Rusty Cooper
Brooklyn Konrad volleys the ball back over the net in action last week at DCHS.

The Dade County High School Lady Wolverine volleyball team had a big week last week as the State A/AA Volleyball Tournament got underway. The Lady Wolverines hosted Elite Scholars Academy from Jonesboro on Wednesday, Oct. 20 in the first round of the tournament.

The Lady Wolverines were dominate against the visiting Elite Scholars and won all three sets, 25-12, 25-15, and 25-10 to take the match 3-0 and advance to the Sweet Sixteen.

Advancing to the second round the Lady Wolverines had to make the long trip to Thomasville High School in Thomasville on Saturday, Oct. 23.

The long trip did not seem to have any effect on the Lady Wolverines as they came out ready to play and took the first set 25-15. The second set was another dominating performance for them as they took the set 25-14 and followed that up with a 25-19 win to take the match 3-0 and advance to the Elite Eight.

This makes the second time the Lady Wolverines have advanced to the Elite Eight in the program’s short history.

The Lady Wolverines are playing at Blairsville High School today against Union County High School with the winner advancing to the final four on Saturday, Oct. 30 with the state championship being played on Nov. 6. Both those sites are yet to be determined.
Good luck Lady Wolverines!