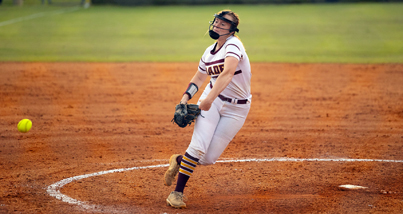 Photo courtesy of Rusty Cooper
Kayleigh Warnock earned the win in the 10 inning game against Cook High School last Tuesday. DCHS swept the Lady Hornets and advanced to the Elite Eight of the state tournament.

The Dade County High School Lady Wolverine softball hosted their second-round games of the 7–AA State Tournament last week and the large crowd in attendance got their moneys worth, especially in the first game.

The Lady Hornets got a runner in scoring position in the top of the first on a Lady Wolverine error and a sacrifice bunt, but the threat ended when Kayleigh Warnock struck out the clean-up hitter to end the inning.

Dade got off to a good start when Ali Thompson singled with one out and stole second. A single by Kristen Fowler and Kaitlyn Stinnett scored Thompson and Dade had the early lead, 1-0.

After a scoreless second inning Adel tied the game on a home run by third baseman M. Griffis.

The score remained tied until the bottom of the fifth inning when Thompson doubled and later scored on a sacrifice fly to put the Lady Wolverines back on top 2-1.

That lead didn’t last long as the Lady Hornets scored in the top of the sixth after Griffis walked and later scored to tie the game 2-2.

A scoreless seventh inning sent the game into extra innings and the battle continued. Both the eight and ninth innings were scoreless and heading into the 10th the teams started the inning with a runner at second (that started in the ninth, but no one scored).

The Lady Hornets led the inning off with a single and moved the runner to second on a sacrifice bunt. Lead off hitter K. Arnold then hit a home run to left-center field to give the Lady Hornets a 4-2 lead.

In the bottom of the 10th inning DCHS responded with three runs on three hits to claim the victory. Stella Henry, Thompson, and Kami Counts picked up the hits to secure the hard-fought win in the first game of the series.

Warnock picked up the win, pitching ten innings allowing seven hits and four runs while striking out four and walking just one.

Thompson and Stinnett led the Lady Wolverines with three hits each with Thompson also scoring three runs and batting in one.

In the second game the Lady Wolverines were the visiting team and got the game started with three runs in the top of the first inning on two hits and four walks to go up 3-0.

Adel came up in the bottom of the first with three runs as well, picking up six hits to tie the game 3-3.

In the top of the second the Lady Wolverines scored three more runs on three hits to take the lead again, 6-3.

In the bottom of the second the Lady Hornets managed one hit but couldn’t score and after two innings of play Dade held a 6-3 lead.

In the top of the third inning the Lady Wolverines put up another three spot to take a 9-3 lead over the very good Lady Hornet team.

Counts pitched shut out innings in the third, fourth and fifth innings while the Lady Wolverines continued to build their lead, scoring one run in the fifth and two in the sixth to lead 12-3 heading into the bottom of the sixth inning.

In the bottom of the sixth Adel rallied for three runs on three hits, the big blow was M. Griffis second home run of the day to make it a 12-6 game.

The Lady Hornets did manage a run in the bottom of the seventh, but Dade claimed the win and the series by the final score of 17-6.

The Lady Wolverines now advance to the Elite Eight in Columbus for the AA State Tournament finals. They will open play on Thursday morning at 11 a.m. against Union County. A win in that game and they will play again at 7 p.m. on Thursday. A win there and they play on Saturday for the state championship. If they lose either game they will play on Friday and could still advance to the finals in the double elimination tournament.

Good luck to the Lady Wolverines as they seek a state championship!