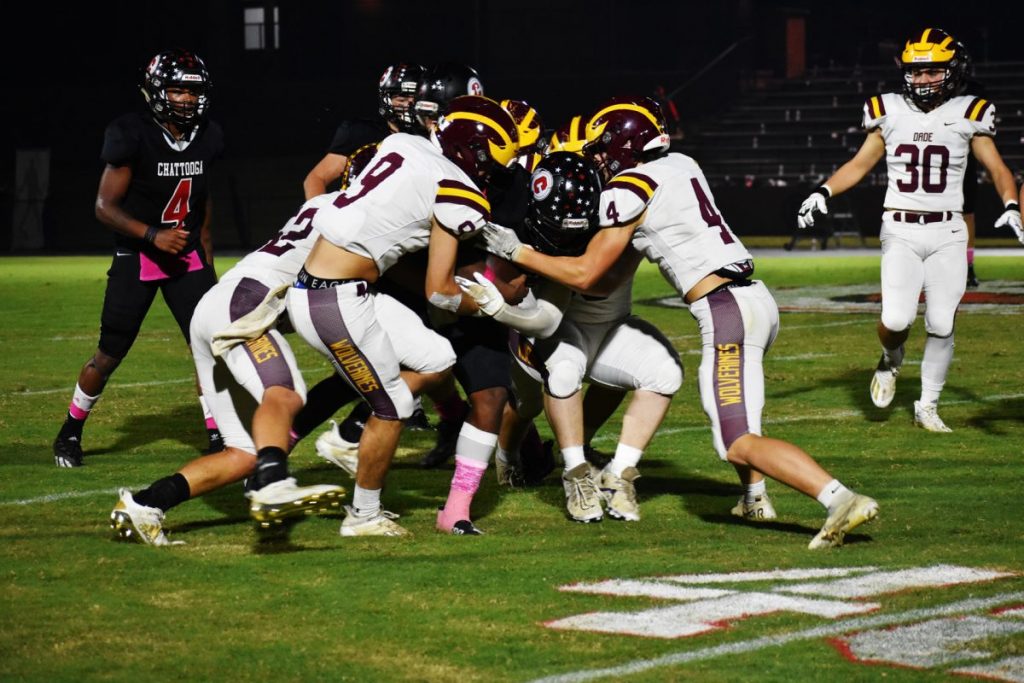 EDDY GIFFORD/Dade County Sentinel
The Wolverine defense stops the advancement by the Chattooga Indians in last Friday’s game. Dade hosts Coosa this Friday for its homecoming game and the last home game of the season.

The Dade County High School Wolverine football team traveled to Summerville Friday night to face the Chattooga Indians in a big Region 7-AA match up of two of the top teams in the region.

The Wolverines and Indians both came into the game undefeated in region play and looking to remain that way.

The Indians won the coin toss and elected to receive the opening kick. They were able to put together a long opening drive and made it into the end zone for the first score of the game on a 41-yard run with 9:22 remaining in the first quarter. The extra point kick was good, and the Indians were up 7-0.

The Wolverines took the ball on their first possession of the game and duplicated what the Indians had done, drove the ball down the field and with 4:33 remaining in the first quarter Cayden Cooper scored on a five-yard run. Caroline Tremmier kicked the extra point, and the game was tied 7-7.

The Indians, who feature a high-powered running game, again drove the ball down field and with 1:58 remaining in the first quarter scored on a one-yard run. The extra point kick was good, and the Indians were back on top 14-7.

The Wolverines, on just their second possession of the game, put together another long drive and with 6:19 remaining in the first half Brody Cooper ran in from 11-yards out for a touchdown. The Abigail Tremmier extra point kick was blocked, and the Wolverines trailed 14-13.

Things settled down after that and neither team was able to put together another drive and the first half ended with the Indians on top 14-13 in a hard fought first half.

The second half started as the first half ended with both teams struggling to put a drive together until midway through the third quarter.

The Indians found the end zone again with 5:11 remaining in the third quarter on a one-yard run and the extra point kick was good to put them up 21-13.

The Wolverines struggled to put a drive together in the second half as the Indian defense kept the pressure on, but they remained in the game at the end of the third quarter down by eight, 21-13.

The Wolverine offense continued to struggle in the fourth quarter as they were missing a couple of players to injury and just could not seem to put anything together.

The Indians continued to pound the running game and with 7:53 remaining in the game scored again, on another one-yard run, and with the extra point kick to the lead 28-13.

Battling to the very end the Wolverines just could not get into the end zone again and fell to the Indians 28-13.

Brodie Cooper led the Wolverine offense, completing 13 of 18 passes for 119 yards and one interception. Cayden Cooper, who was injured just before the end of the first half, had 13 carries for 62-yards in the first half and was unable to play in the second half.

Cody Williams had 7 carries for 36 yards in limited action on offense as well.

The Wolverines had 119 passing yards while the Indians only threw the ball once for 3 yards.

Coach Jeff Poston stated, “Things did not go our way in several aspects of the game. That’s just how it goes sometimes. Our focus is on getting healthy, and winning the next three games. These kids don’t have any quit in them, so the next three weeks should be fun.

This week the Wolverines host the Coosa Eagles in homecoming. This will also be the last home game of the regular season so get out and support the good Wolverine football team. A win Friday night will assure them a playoff game. They are still in the running for a top two finish which would set them up to host a first round game.

Kick off is set for 7:30 Friday night so fill the stand and support the Wolverines!