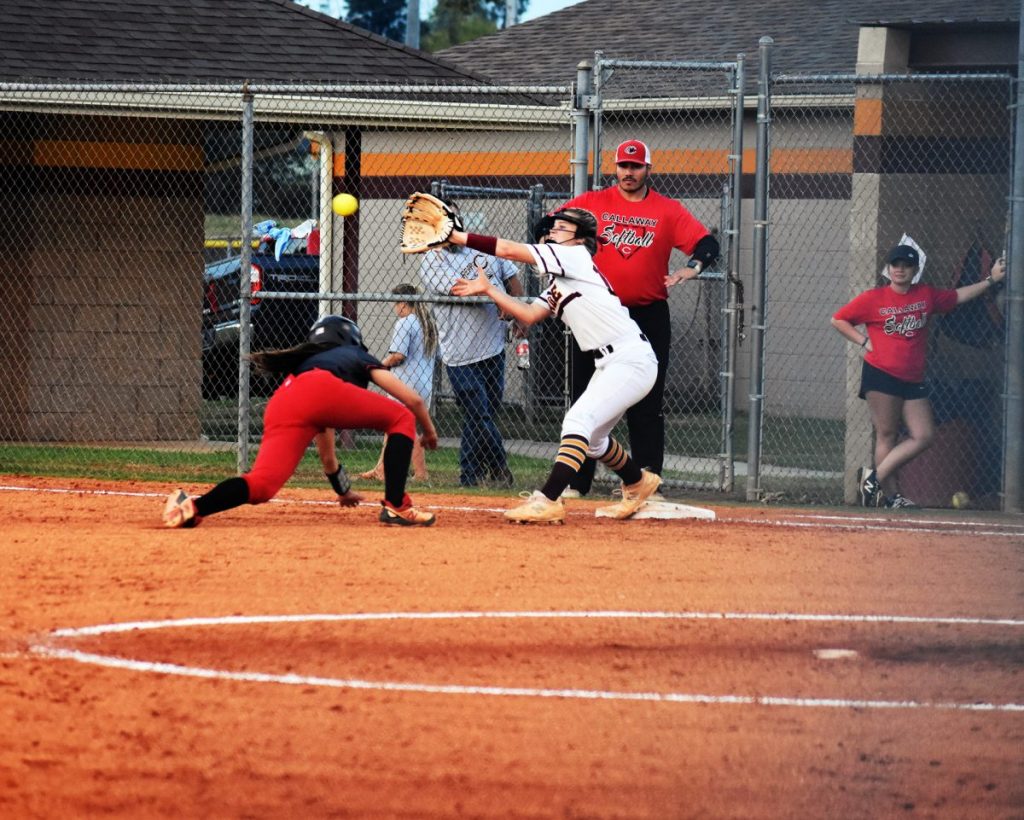 EDDY GIFFORD/Dade County Sentinel
Adilyn Gross makes the out at first to end the Lady Wolverine double play in the first round of the state tournament last week.

Dade County High School’s Lady Wolverine softball team opened play last week in the first round of the AA State Softball Tournament when they hosted Callaway for a best of three game series.

The Callaway Cavaliers, from Hogansville finished fourth in Region 5-AA earning them the match up with the top seeded Lady Wolverines from Region 7-AA.

The Cavaliers got off to a good start as they scored two runs in the top of the first inning as Dade’s Kayleigh Warnock got off to a slow start, walking three in the inning as DCHS fell behind 2-0.

It did not take long for the Lady Wolverines to catch up however as Stella Henry led off with a single and then Ali Thompson hit a long home run to tie the game at 2-2.

That was just the beginning for the Lady Wolverines as they followed that with six more hits and three walks to plate eight more runs in the inning and after one inning of play had a commanding 10-2 lead.

The Lady Cavaliers continued to battle and pushed across three more runs in the top of the second inning to make it a 10-5 game.

The Lady Cavaliers were not able to score again, and the game was ended in the fifth on the run rule with DCHS taking game one 16-5.

In the second game the Lady Cavaliers were the home team, and the Lady Wolverines got a lead-off single from Henry but failed to score. Counts pitched out of a bases loaded jam in the bottom of the first to keep the game 0-0 after one inning of play.

Tierce single to lead off the second and later scored on a fielder’s choice to give the Lady Wolverines a 1-0 lead.

Counts continued to dominate the Lady Cavaliers in the second and after two innings the score was 1-0 in favor of DCHS.

In the top of the third inning Thompson led off the inning with a double and scored on Fowler’s double who later scored on an error to put Dade up 3-0.

The Lady Cavaliers managed a single in the bottom of the third but was unable to score and after three innings the score remained 3-0.

In the top of the fourth Emma Heard singled with one out and Henry followed with a single and Thompson hit her second home run of the day, a three-run shot to make it 6-0. Fowler then double, Counts singled and Kaitlyn Stinnett double for two more runs and the Lady Wolverines were up 8-0.

Heard got Dade started again in the top of the fifth with a single and after Henry drew a walk Thompson hit her third home run of the day – another three-run shot to put the Lady Wolverines up 11-0. Dade added another run and ended the game win the bottom of the fifth, claiming a 12-0 win.

Counts picked up the win, pitching four innings giving up no runs and four hits. Alyssa Wilson pitched the final inning giving up no hits and striking out one.

Thompson again had the hot bat for the Lady Wolverines picking up three hits, two three-run home runs and a double, scored three runs and had six RBI’s. Henry, Fowler, Counts, and Heard all had two hits each as they pounded out 13 hits in the game.

The two-game sweep of the Lady Cavaliers advanced the Lady Wolverines to the Sweet Sixteen.

The Lady Wolverines will be hosting again this week when Cook High School from Adel will travel to Trenton for the best of three series starting on Tuesday.

The Cook Lady Hornets come as the Runner up in region 1-AA with a 21-3 overall record and 13-2 in region play.

The first game of a double header will begin at 5 p.m. on Tuesday, Oct. 19 and the second game follows at 7 p.m. If a third game is necessary, it will be played at 4 p.m., on Wednesday.

Everyone is asked to fill the stands to support the Lady Wolverines as they look to advance to Columbus and the Elite Eight next week. A large home crowd could be a big factor as this looks to be a good match up for the Lady Wolverines.