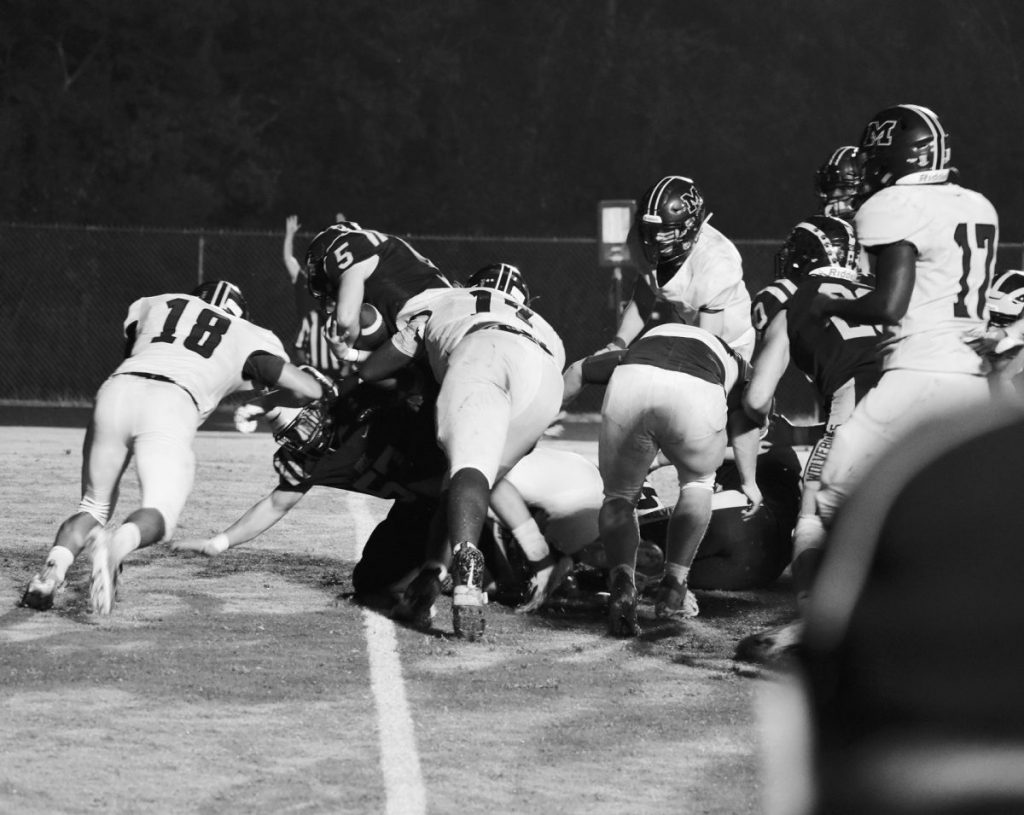 EDDY GIFFORD/Dade County Sentinel
Cayden Cooper crossed the goal line in overtime to give the Wolverines the win Friday night over the Model Blue Devils.

The Wolverine football team hosted the Model Blue Devils on Friday night at Magic Morgan Stadium with a large crowd of Wolverine supporters on hand for the game. It was a great night for football and the fans got their money’s worth even though it was not Dade’s best effort.

The Blue Devils took the opening kick and found out the Wolverine defense had come to play as they were stopped on three consecutive plays and forced to punt.

Dade’s offense then took over and drove the ball down the field, picking up several first downs and finished the drive when Cody Williams ran in from five yards out for the first points of the game. The Caroline Tremmier extra point kick was good, and the Wolverines had a 7-0 lead with 3:58 remaining in the first quarter.

The Wolverines then kicked to Model, and they returned it for an 87-yard touchdown and with the extra point tied the game 7-7 with 3:42 remaining in the first quarter.

While Dade dominated play the remainder of the first half, they were unable to reach the end zone again and the first half ended tied 7-7. The Wolverines were hurt by penalties and turnovers and just could not put a drive together in spite of their hard play.

Dade’s defense dominated the Blue Devils, and they were not able to score again either in the first half.

The Wolverines took the second half kick and put together an impressive drive and with 7:16 remaining in the third quarter Cayden Cooper scored on a three-yard run to put the Wolverines back on top. Abigail Tremmier kicked the extra point, and the Wolverines were up 14-7.

Dade’s defense continued to dominate Model and at the end of the third quarter the Wolverines still lead 14-7.

The Blue Devils put together a drive midway through the fourth quarter and with 5:28 remaining in the game scored on a 15-yard pass play and the extra point kick tied the game 14-14.

In the final five minutes of the game neither team was able to cross the goal line and the game went to overtime.

In overtime each team took possession at the 15-yard line. Each team had the opportunity to score, could pickup a first down to continue the drive. The Wolverines won the toss and elected to defer, giving the Blue Devils the first opportunity to score.

Model could only get to the 22-yard line and on fourth down kicked a 29-yard field goal to take the lead 17-14.

The Wolverines then took possession at the 15-yard line and after picking up a first down inside the five-yard line Caden Cooper bulled his way into the end zone for the touchdown and the win for the Wolverines, 20-17.

It was another big Region 7-AA win DCHS who will travel to Chattooga on Friday to face the Indians who are currently 3-0 in region play. It will be a huge game for both teams and the Wolverines need a big crowd to travel to Summerville to support them.

Cayden Cooper had a big night for the Wolverine offense as he carried the ball 28 times and gained 116 yards and scored two touchdowns. Brodie Cooper had 111 yards passing completing 11 of 14 attempts.

Coach Jeff Poston commented on the win and his appreciation for the fan support for the Wolverines.

“Once again, our effort and heart were outstanding, and that is how we won the game. Model did a better job of executing, and they had just as much right to win that game as we did. Cody Williams and Cayden Cooper both took a beating, but they both refused to lay down. We have a very gutsy football team, but we are still searching for the magic formula when it comes to executing in a consistent manner.

I want to thank the community for filling the stands. That is what a home football game should feel like. That crowd made a huge difference for us at the end of that game,” Poston said.

Game time Friday at Chattooga is 7:30 p.m., and the Wolverines are looking for a big crowd to be there to support them in the biggest region game of the season. DCHS can bring home the win but they need all the Wolverine fans on hand, so make the drive to Summerville and cheer on the Wolverines!