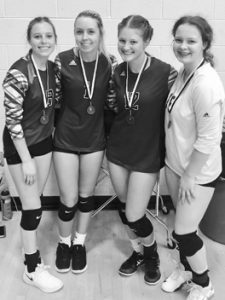 The Dade County High School Lady Wolverine volleyball team traveled to Gordon Lee last Saturday for the Area 7–A/AA Tournament and came away as the runner up. Gordon Lee claimed the championship.

DCHS will now host the first round of the state tournament and that first match will be in two weeks against a team to be determined. The match will be either Oct. 19 or 20 against the three seed from Region 5.

The Lady Wolverines were well represented on the All-Tournament Team as Logan Frint and Zoie Smith were name to the first team and Delaynee Davis and Heidi Raines were named to the second team.

Check next week’s Dade County Sentinel for exact dates and time for the match.

Wolverines Suffer Their First Region Loss Of The Season At Chattooga