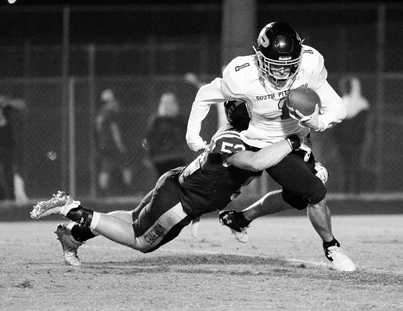 Photo courtesy of Rusty Cooper
Landon Williams brings down the Pirate receiver in last Friday’s game against South Pittsburg. Dade played before a packed stadium and came away with a 26–20 win.

The Dade County High School Wolverine football team hosted the South Pittsburg Pirates on Friday night at Magic Morgan Stadium before the biggest crowd in a long time for a Wolverine home game.

The Wolverines would score first when Cayden Cooper found the end zone from four yards out with 4:26 remaining in the first quarter and Caroline Tremmier kicked the extra point to put them on top 7-0.

South Pittsburg answered three minutes later when they scored on a two-yard run and the extra point kick tied the game 7-7 with 55 seconds remaining in the first quarter.

Early in the second quarter the Pirates used their speed to score on a 59-yard run and the extra point kick put them on top with 9:08 remaining in the first half.

The determined Wolverines continued to play hard and with 3:25 remaining in the first half Caroline Tremmier kicked her first ever field goal, from 24-yards out, to cut the Pirate lead to 14-10.

Then just before the end of the first half, Brody Cooper scored from two yards out and the extra point kick by Abigail Tremmier was good and Dade was back on top 17-14 with 15 seconds remaining in the first half.

The half ended with the Wolverines holding a three-point lead and looking very impressive against a very good South Pittsburg team with great team speed.

Midway through the third quarter the Wolverines scored again, this time on a 31-yard field goal by Caroline Tremmier to increase their lead to 20-14 with 7:06 remaining in the third quarter.

Heading into the fourth quarter Dade continued to hold on to their lead, 20-14.

With 5:29 remaining in the game Brody Cooper threw a 29-yard touchdown pass to Cayden Cooper to put the Wolverines up 26-14. The extra point kick was no good.

The Pirates tried to rally back and with 3:48 remaining in the game scored on an 11-yard touchdown pass and the extra point kick cut Dade’s lead to 26-20.

The Wolverine defense, who played well all night, rose to the occasion, and shut down South Pittsburg the rest of the way giving DCHS a huge win heading into the remainder of the Region 7-AA schedule, 26-21.

Wolverine head coach Jeff Poston had this to say about the big win. “South Pittsburg had the most team speed I have seen since I have been at Dade County. We have played a couple of guys here and there with that kind of speed, but not a whole team full of those guys. Our kids made adjustments, including an entirely different defense in the second half, and they refused to quit again. Our girls were huge in this game! We do not win the game without the two field goals! Absolutely a great team effort by everyone involved. I was also excited to see the community come out and support the kids. I hope they continue making Magic Morgan Stadium a tough place for opposing teams.”

This Friday Dade will be back in Region 7-AA play when they host the Model Blue Devils with kickoff set for 7:30 p.m.

Come out and support the 4-1 Wolverines and fill the stadium!