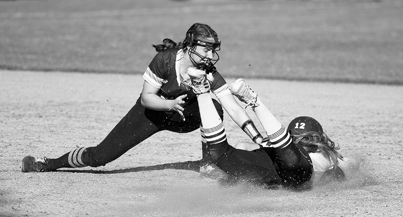 The Dade County High School Lady Wolverine softball team had another busy week as they had three games, two region games, but the biggest game was a showdown with the Lady Trojans of Gordon Lee. The Lady Trojans are one of the state’s best teams, dominating class A for several years, consistently winning state championships.

At the Lady Trojans’ field on Monday, Sept. 27 Dade was looking to make a statement and get ready to make their own serious run at a AA state championship in the next few weeks. A win could give them the additional confidence they need for that run.

Stella Henry led off the game with a double and Ali Thompson followed with an RBI single to give the Lady Wolverines an early lead.

The game quickly settled down as Kayleigh Warnock was spot-on retiring the Lady Trojans in order in the first four innings carrying a perfect game into the bottom of the fifth inning.
Dade got a pair of runners on in the fourth inning on a pair of singles by Olivia Tierce and Alyssa Wilson but were unable to score and it remained 1-0.

In the bottom of the fifth inning Gordon Lee got their first base runner on with a single to center field who then advanced to second, but a strikeout ended the threat and the Lady Wolverines led 1-0 through five innings.

Cami Counts led off the sixth inning for DCHS with a single and advanced to third on a double by Kaitlyn Stinnett. Maddie Cuzzort, who was pinch running for Counts was then retired on a fielder’s choice with Stinnett advancing to third with two out.

Tierce then reached on a fielder’s choice and Stinnett scored to put Dade up 2-0.
The Lady Trojans went down in order in the bottom of the sixth as did the Lady Wolverines in the top of the seventh.

Gordon Lee got a single with one out and another single with two outs. With runners at first and second Warnock got a popup to second base for the final out of the game and the Lady Wolverines had that statement win 2-0.

Warnock pitched her best game of the year going seven innings, giving up just three hits and striking out four while walking just one against a very good Lady Trojan team.

On Tuesday afternoon it was batting practice for the Lady Wolverines when Gordon Central came calling. The game took less time to play than it took for the team from Calhoun to get here as the Lady Wolverines scored 15 runs in three innings, actually the game was called with no outs in the third.

Stinnett had three hits, Henry, Thompson, and Tierce all had two hits each.
Wilson picked up the win pitching three innings, giving up four hits, struck out two and walked one and gave up no runs.

On Thursday the Lady Wolverines traveled to Summerville to face the Lady Indians of Chattooga County. Dade had handed them their first loss of the season and they were looking for revenge.

It did not take the Lady Wolverines long to get on the board as Henry led off with a single and then Thompson hit the first pitch over the fence for a home run and a quick 2-0 lead.

The Lady Indians responded in the bottom of the first when they picked up a run when the lead-off hitter reached on an error, advanced to second on a single, to third on a walk, and scored on a past ball to make it a 2-1 game after one inning.

In the third inning the Chattooga tied the game on a walk, two singles, and a sacrifice fly making it 2-2.

In the top of the fifth inning Reagan Page led off with a triple and with two outs Thompson singled and picked up her third RBI of the game to make it 3-1 DCHS.

The Lady Wolverines added to their lead in the top of the sixth on a Stinnett single, Tierce triple and Page singled to make it 5-2.

The Lady Wolverines would add two more runs in the top of the seventh on singles by Henry, Thompson and Stinnett and came away with a big 7-2 win and clinch the Region 7-AA Championship.

The Lady Wolverines are scheduled to host two Region 7-AA games this week to end the regular season and start the state Tournament next week when they will host a team to be determined as well as dates and times for the three-game series.