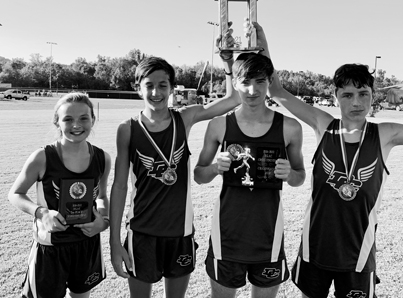 On Tuesday, Sept. 28, the DMS Cross Country team competed in the NGAC Championship.

The Wolverines faced the top teams in the region for a shot at the title of NGAC Champions.

The girl’s team finished in third place with a third place finish by Kailey Pardue. Rounding out the girl’s top three were Abbi Walker and Cam White. Raygen Francis and Lahna

Hartline both finished with their best times of the season.

In the boy’s race, the Wolverines fought hard in their closest race of the season. DMS finished in second place and won the title of NGAC runner up.

Coaches Lauren Ambrose and Wil Martin would like to thank all the runners for their hard work this season. Also a big thank you to the team’s master of transportation, Gary Friskie, for being a fantastic bus driver. Not only did Mr. Friskie transport the students safely to the meets, but he also unloaded coolers, equipment, and encouraged the runners.