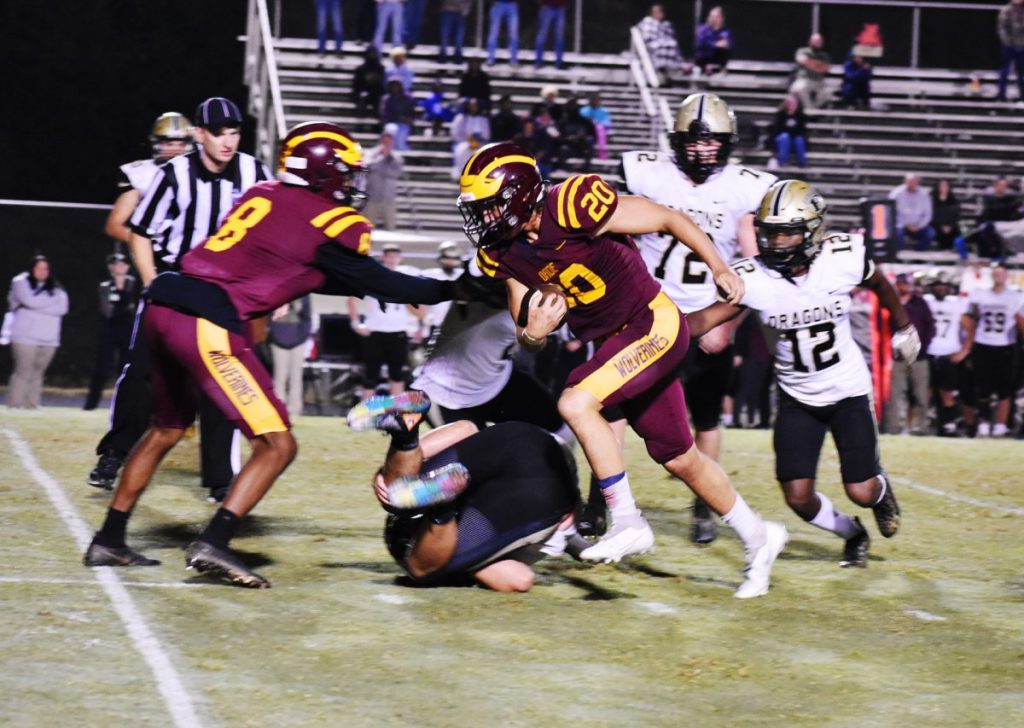 EDDY GIFFORD/Dade County Sentinel
Cody Williams heads for the end zone for the Wolverines. Williams led the Wolverine offense with two touchdowns and had 122 yards rushing. 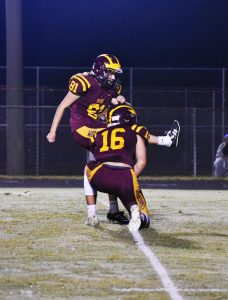 EDDY GIFFORD/Dade County Sentinel
Caroline Tremmier puts the winning point on the board for DCHS.

The Dade County High School Wolverine football team opened play in Region 7-AA on Friday night when they hosted the Pepperell Dragons. If you missed the game, you missed one of the best Wolverine football games in a long, long time. DCHS, who continue to improve under coach Jeff Poston and his staff, fought through adversity to come out on top in a game that was never more than seven points apart.

The Dragons got on the board first when they scored on a 13-yard pass a touchdown early in the first quarter and the extra point kick was good to give them a 7-0 lead.

The Wolverines moved the ball consistently but was unable to find the end zone and at the end of the first quarter were down 7-0.

Late in the first half Dade put together a long drive that ended with a Brody Cooper pass to David Cole in the end zone. Cole fought off the defender and made the catch for a touchdown. Caroline Tremmier’s kick tied the game at 7-7.

The half ended 7-7 and no one expected the second half to be better than the first, but it was.
Early in the third quarter Cody Williams took the hand-off and raced up the middle, breaking several tackles, and put the Wolverines on top for the first time on a 30-yard touchdown run. Abigail Tremmier kicked the extra point, and the Wolverines had their first lead of the night 14-7.

Just before the end of the third quarter the Dragons scored on a 37-yard field goal to cut Dade’s led to 14-10.

While the Wolverines continued to play hard the turnover bug plagued them as they lost two fumbles and had two passes intercepted to keep the game close.

Early in the fourth quarter Pepperell hit on a big play and scored on a 67-yard run and the extra point kick put them on top 17-14. A short time later they added to their lead on another 37-yard field goal to put them on top 20-14.

Late in the fourth quarter Cody Williams had his second big run of the night when he ran off tackle, breaking tackles before breaking into the open field and raced 40-yards for a touchdown to tie the game 20-20. Caroline Tremmier lined up for the extra point, but a five-yard penalty moved the ball back, but it did not bother her as she easily made the extra point, and Dade was back on top 21-20.

With just over three minutes remaining in the game the Dragons mounted a drive that ended on a missed field goal attempt as time ran out and the Wolverines had a huge 21-20 win in the first region game of the year against one of the better teams in the region.

Cody Williams led the Wolverine offense with two touchdown runs and had 122 yards rushing on 14 carries. Cayden Cooper, who ran hard all night, finished with 109-yards on 16 carries.

Cole caught one pass for 28-yards and a touchdown while Zeke Wheeler had three catches for 19-yards.

Wolverine coach Jeff Poston had this to say about the big region win. “The coaches all felt like we were the better team, but we knew it was a huge mental hurdle for our kids to get past the name on the other jersey. When we came in at the half, the kids kept saying, “We can beat them…we’re stronger than they are, we’re better than they are…we can win this game.” That was a huge moment for our team.

I just wish we hadn’t helped them stay in the game by turning it over four times. They never should have had an opportunity to win it at the end. We cannot live dangerously like that again, but what a credit to our kids that they never quit, no matter what went wrong, they just kept playing.”

No doubt that was the biggest win in recent Dade County football history and should lead to bigger and better things in the future for them.

This week the Wolverines will host South Pittsburg, Tenn., in a game to replace the Trion game that had to be canceled. DCHS will face a big challenge from their Tennessee neighbors as they have been a team to be dealt with for many years.

Come out and support the Wolverines as they continue their quest to be a playoff contender in Region 7-AA!