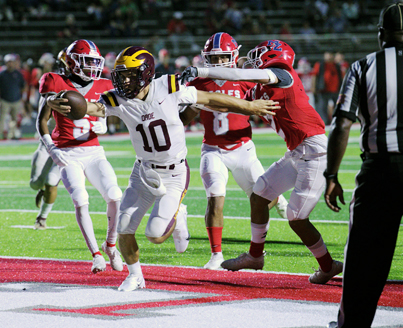 Photo courtesy of Rusty Cooper
QB Brody Cooper finds his way into the end zone from the five–yard line at Mt. Zion last Friday. Cooper threw for 178 yards and ran 27 yards for the Wolverines in the game.

Early in the second quarter Mt. Zion found the end zone again, this time on a 14-yard run and the extra point kick put them on top 14-0 with 11:52 remaining in the first half.

Dade scored its first points of the game when Brody Cooper ran in from five-yards out and Caroline Tremmier kicked the extra point to cut the Mt. Zion led to 14-7.

Just over four minutes later Mt. Zion answered Dade’s score when they threw a 63-yard touchdown pass and with the extra point increased their lead to 21-7 with five minutes remaining in the first half.

The Wolverines answered that score when Brodie Cooper threw to Cayden Cooper for a three-yard touchdown with one second remaining in the first half. The extra point kick was blocked, and Dade trailed 21-13 at the end of the first half.

The score remained the same until late in the third quarter when Mt. Zion scored again on a 17-yard run and the extra point kick made it 28-13.

DCHS continued to play hard and with 11:51 remaining in the game Brodie Cooper threw to Brodie Swader for a 19-yard touchdown and the Tremmier kick closed the gap to 28-20.

Mt. Zion answered the Wolverines’ score with a three-yard touchdown run with 7:30 remaining in the game and the extra point put them on top 35-20.

Dade kept battling and with 2:54 remaining in the game scored again on a five-yard Brodie Swader run and the Tremmier kick made it 35-27.

The Wolverines were unable to score again and dropped their first game of the season by the final score of 35-27.

Coach Jeff Poston had this to say about the game: “We really shot ourselves in the foot Friday. We were very undisciplined on defense, and we wanted to do other people’s jobs. We didn’t have a good week of practice leading up to Friday, so I guess it just carried over into the game. Our effort was outstanding! There were several times the kids could have quit, but they never did. We had an opportunity to win it at the end because of their effort.”

The week the Wolverines open Region 7-AA play when they host the Pepperell Dragons with kick off set for 7:30 p.m. Get out and support this good Wolverine football who are currently 2-1 for the season.

On Oct. 1 the Wolverines will host South Pittsburg, Tenn., in a game to replace the Trion game that had to be canceled.