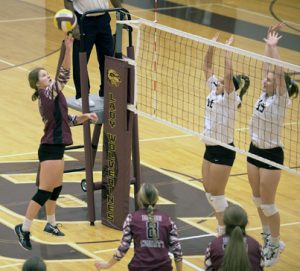 Photo courtesy of Rusty Cooper
Heidi Raines puts the ball up for the Lady Wolverines as two defenders try to block her shot.

The Lady Wolverines then took on Oakwood Christian Academy and had their hands full. After dropping the first set 17-25 Dade rebound to take the second set 28-26 and then took the final set 15-12 to claim the match 2-1.

On Thursday Dade took on the Ridgeland Lady Panthers and took the first two sets 25-17 and 25-23. After dropping the third set 20-25 they rebound to take the fourth set 25-22 and claimed the hard fourth match 3-1.

This week the Lady Wolverines hosted Pisgah, Ala., and Ft. Payne, Ala., on Monday, Fannin County and Trion on Tuesday and then face East Ridge and Ridgeland on Thursday.