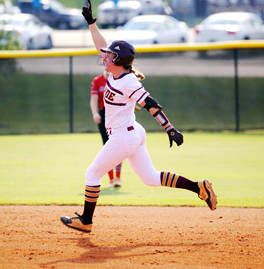 Photo courtesy of Rusty Cooper
Kristen Fowler puts one over the fence for the Lady Wolverines at home last week against the Chattooga Lady Indians. Dade is scheduled to play at Model on Thursday.

The Dade County High School Lady Wolverine softball team had a very busy week last week when they played five games, the biggest being the first game of the week against the undefeated Lady Indians of Chattooga. This was the big test in Region 7-AA with the Lady Indians coming in with a perfect 11-0 record while the Lady Wolverines sported a perfect region record.

It didn’t take Dade long to prove their dominance as they scored a pair of runs in the first inning and then added two more in the third to take a 4-0 lead.

The Lady Indians got their first run of the game in the fourth to cut the lead to 4-1 but the Lady Wolverines erupted for six runs in the bottom of the fourth to go up 10-1.

Chattooga managed three runs in the top of the fifth however to cut the lead to 10-4 but Dade ended the game in the bottom of the fifth with a pair of runs to run rule the previously undefeated Lady Indians 12-4.

The Lady Wolverines were led by Stella Henry with four hits and four runs scored and a pair of RBIs while Ali Thompson had three hits, three runs scored and three RBI’s. Kristen Fowler and Raegan Page had two hits each in the game as well.

Kayleigh Warnock picked up the win pitching five innings, giving up four runs, just one earned, and striking out six.

On Tuesday the Lady Wolverines traveled to Coosa to face a much-improved Lady Eagles team and again made quick work of the host.

DCHS scored three first inning runs and never looked back. They scored one in the second, two in the fourth and fifth and came away with another run rule win, 8-0 in five innings.

On Thursday the Lady Wolverines made the long trip to Blue Ridge to face Fannin County in another Region 7-AA game.

The long bus ride seemed to have an affect on Dade as the team managed only one run in the first inning and did not score again until the top of the fourth giving them a 2-0 lead.

Still leading by two in the sixth inning the Lady Wolverines put the game away with seven runs and came away with 9-0 run rule win to stay undefeated in region play.

Page led the Lady Wolverines with three hits while Henry, Thompson and KK Castleberry had two hits each. Thompson and Olivia Tierce each had a home run in the game.

Warnock picked up the win pitching a one hitter and striking out seven.

The Lady Wolverines stepped out of region play on Saturday when they played a pair of games in a tournament.

In the first game Dade faced Lovett and fell behind early as they scored two in the first and one in the second to take a 3-0 lead.

DCHS scored their first run of the game in the bottom of the second inning to cut the lead to 3-1 but Lovett came back in the top of the third and scored again to make it 4-1.

Still trailing 4-1 in the bottom of the fourth the Lady Wolverines rallied for four big runs to take the lead 5-4 and then held on to claim the win in the five-inning game.

Warnock picked up the win pitching 2.2 innings and giving up just one hit and striking out one.

In their final game of the week Dade faced Strongrock in what turned out to be a pitchers dual.

Strongrock scored a run in the bottom of the seventh to tie the game and it ended on a tie due to the time limit.

Fowler and Tierce led the Lady Wolverines with two hits each with Thompson picking up the other hit.

This week the Lady Wolverines will travel to Model on Thursday.