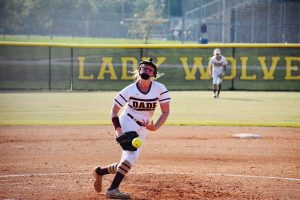 EDDY GIFFORD/Dade County Sentinel
Lady Wolverine Kayleigh Warnock picked a big win over Pepperell on Thursday when she pitched a complete game in the Region 7-AA match up. The Lady Wolverines rallied late to secure the win.

After two blow-out wins last week over region foes Dade got off to a slow start in this game going down in order in the first inning. The Lady Dragons took advantage of a pair of singles in the bottom of the first inning and took the early lead 1-0.

The Lady Wolverines got a lead-off walk in the top of the second inning, but a pair of strikeouts and a line drive out ended the inning without a run.

Pepperell added to their lead in the bottom of the second inning after a hit batter, stolen base and single produced their second run of the game to make it 2-0 after two innings of play.

Dade’s struggles continued in the third inning when they again went down in order but so did the Lady Dragons and the score remained 2-0.

DCHS finally scored in the top of the fourth inning when Ali Thompson led off the inning with a single. Kristen Fowler singled, Thompson then stole third and scored on a ground out to make it a 2-1 game.

After a scoreless fifth inning the Lady Wolverines rallied for two runs in the top of the sixth to take the lead 3-2. Thompson singled and Kami Counts and KK Castleberry hit back-to-back doubles and Dade was on top.

Pepperell came back in the bottom of the sixth to tie the game on a double and single. Heading into the seventh the game was tied 3-3.

In the top of the seventh with one out Kayleigh Warnock walked, advanced to second on a ground out and scored on an error to put the Lady Wolverines on top 4-3.

In the bottom of the seventh Warnock set the Lady Dragons down in order and the Lady Wolverines pulled out a hard fought 4-3 win over a tough Lady Dragon team.

Warnock picked up the win pitching seven innings giving up seven hits and three runs while striking out five and walking three.