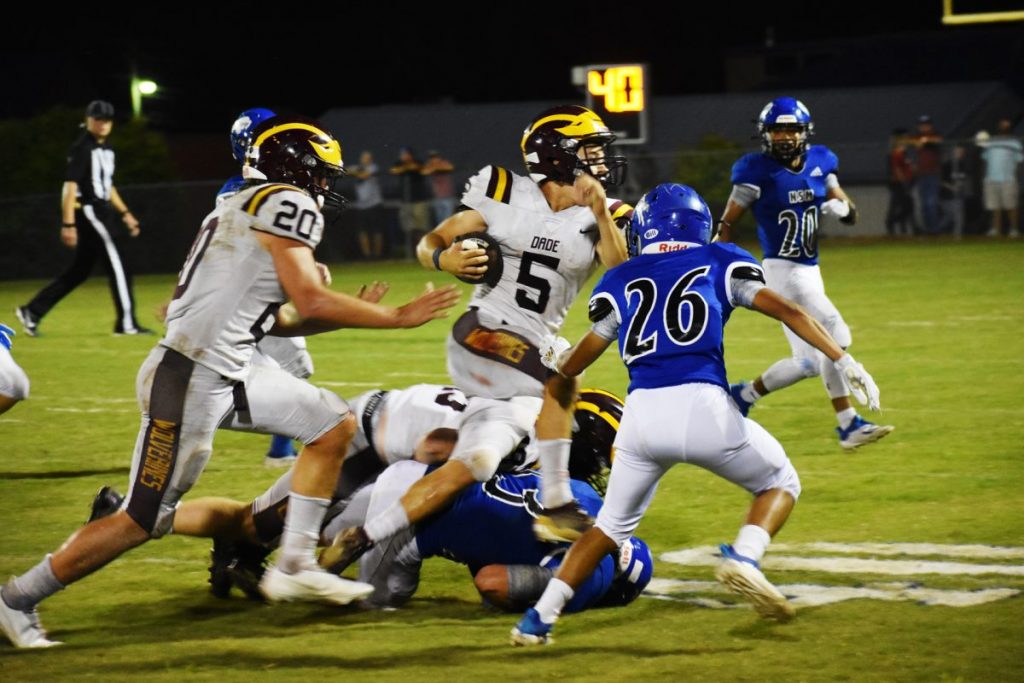 The Dade County High School Wolverine football team traveled to North Sand Mountain on Friday night for their second game of the 2021 season and it turned out to be a big night for the much-improved team even though they got off to a slow start.

Late in the first quarter Dade put together a long drive that ended on an eight-yard touchdown run by Cayden Cooper to put them on top 6-0. The extra point kick by Caroline Tremmier was good to make it 7-0.

The Wolverine coaches said all the right things at halftime as they came out in the second half and put a lot of points on the board.

On their first drive of the second half DCHS got into the end zone on a two-yard run by Brodie Swader to make it 20-0. The Caroline Tremmier kick made it 21-0.

The Wolverine defense dominated the Bison all night and after stopping them on their next drive the Dade offense went back to work.

With 1:08 remaining in the third quarter the Wolverines scored again, this time on a 26-yard run by Cody Williams to make it 27-0 and the Abigail Tremmier’s kick made it 28-0.

Early in the fourth quarter Cody Williams scored again, this time on a nine-yard run and the Caroline Tremmier kick made it 35-0 Wolverines.

DCHS still had plenty left and with 5:40 remaining in the game Cayden Cooper got his second touchdown of the night on a 34-yard run and Abigail Tremmier kicked the extra point to make it 42-0.

The Wolverine defense then backed up the Bison near their own goal line and on fourth down the ball was snapped over the punters head and went out of the end zone for a touchback and two more points for the Wolverines to make it 44-0 with 3:37 remaining.

The Wolverines then received the kick and marched back down the field as Cayden Cooper scored his third touchdown of the night on an 18-yard run and Caroline Tremmier’s kick made it 51-0 with 1:30 remaining in the game.

Dade’s defense stopped the Bison, and the Wolverines had their second win of the season, 51-0.
The Wolverine offense totaled 425 yards of offense, 390 of those coming from the ground game led by Cayden Cooper with 21 carries for 158 yards. Cody Williams had 14 carries for 122 yards and Brodie Swader had 12 carries for 73 yards.

Coach Jeff Poston had this to say after the win, “I was proud that we never let up. We have struggled with that in the past, and if we want to grow as a program, and make a run in the playoffs, we cannot ever let up. We were physically dominate again, but the thing I’m proudest of is that we didn’t commit a single unsportsmanlike penalty. I’m hoping that is a sign that we are starting to mature and understand what is important each week. Now we have to prepare for a Trion team who I consider to be as good as Fannin and Pepperell. I want to see how we respond to a team like that.”

The Wolverines have this week off and will begin preparing for the Trion Bulldogs to come calling on Friday, Sept. 10 at 7:30 p.m.

Get out and support the Wolverines as they look to improve to 3-0!