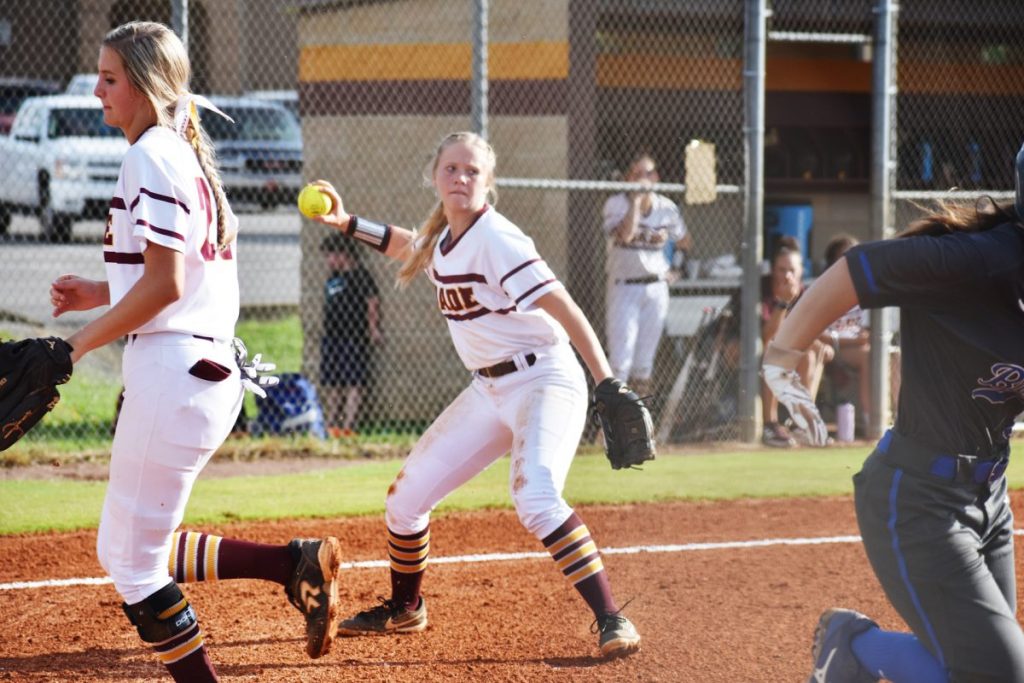 The Dade County High School Lady Wolverine softball team suffered through a tough week as Mother Nature won more than anyone else.

On Monday, a wet field forced the Lady Wolverines game against Gordon Lee to be moved to Chickamauga and then in the top of the first inning with Dade taking a 1-0 lead the rains came and ended the contest.

Their game against Fannin County, the first region game of the year was also rained out.

The Lady Wolverines finally got on the field Wednesday against the Lady Bulldogs from Trion.

The Lady Bulldogs took the lead in the top of the first inning when with two outs a walk and back-to-back singles scored the game’s first run.

Trion added to their lead in the third inning, a pair of singles and two stolen bases produced a run to put them up 2-0.

In the bottom of the third the Lady Wolverines got things going when Olivia Tierce singled and scored on a double by Ali Thompson. Thompson then scored on a single by Kristen Fowler to tie the game 2-2.

The Lady Bulldogs came back in the top of the fourth. A walk followed by a home run put them back on top 4-2.

DCHS managed to score again in the bottom of the fourth on a pair of singles but trailed 4-3 heading into the fifth inning.

Trion scored a run in the fifth and sixth to go up 6-3.

In the bottom of the sixth the Lady Wolverines rallied for three runs when Tierce picked up her third hit of the day followed by a single by Stella Henry and a triple by Thompson scored two runs and then Thompson scored on a wild pitch to tie the game.

The Lady Bulldogs were not phased by the rally and came back in the top of the seventh with three big runs and then shut-out Dade in the bottom of the seventh to claim a 9-6 win.

The loss dropped the Lady Wolverines to 4-2 for the season.

Thompson and Tierce led the Lady Wolverines with three hits each with Thompson scoring once and having two RBI’s and Tierce scored twice and had one RBI. Fowler had two hits in the game with an RBI.

Mother Nature won again on Saturday when DCHS was to host Ridgeland in a makeup of a double header that was rained out earlier in the season.

This week the Lady Wolverines host Model in the first Region 7-AA game of the season on Tuesday and then travel to Gordon Central on Thursday at 5 p.m. in another region game.

On Monday, Aug. 30 the Lady Wolverines host Ringgold and on Tuesday, Aug. 31 host Chattooga with games starting at 5 p.m.