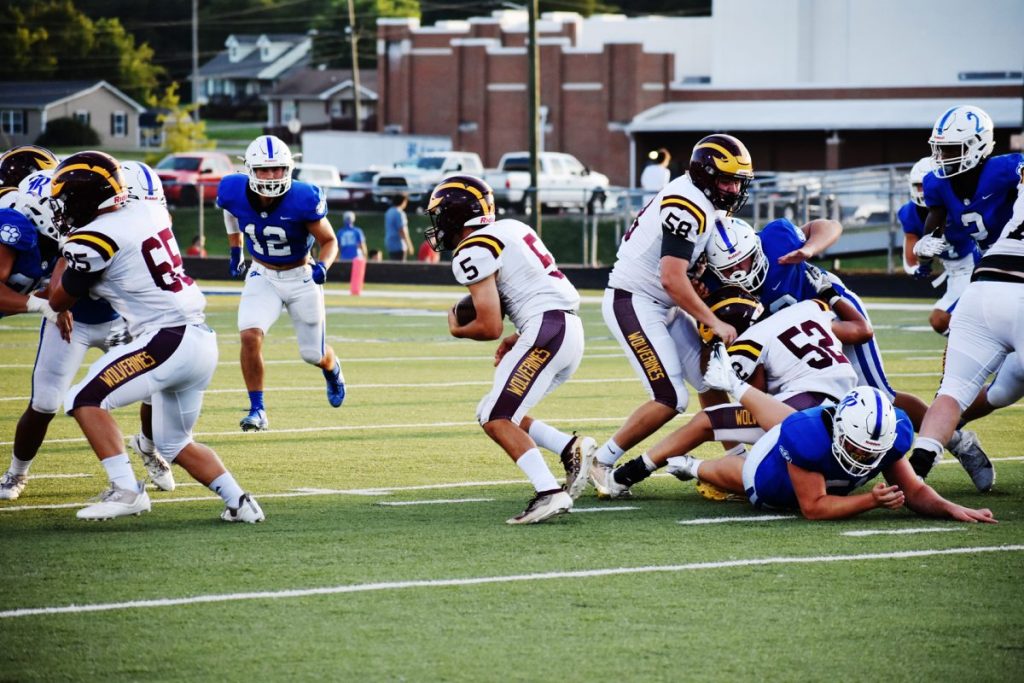 EDDY GIFFORD/Dade County Sentinel
Cayden Cooper picked up 20 yards on 11 carries for the Wolverines in last Friday’s scrimmage at Ringgold. Dade will host Gordon Lee Friday in the first regular game of the season. Kick off is at 7:30 p.m.

The Dade County High School Wolverine football team traveled to Ringgold High School on Friday for a scrimmage game as they continue to prepare for the season opener this Friday night at home against the Gordon Lee Trojans.

The controlled scrimmage was a good tune-up and gave the coaches a good look at players in game conditions against an opponent.

Coach Jeff Poston said, “We had a really bad first defensive drive, but after that the defense played well until one busted play in the third quarter. The score was really 10-0 at the end of the first half because the quarterback was supposed to be down on contact, and we stopped, and the official never blew it dead.

Offensively, we did not run block very well, but we did a very good job of pass protection. Our production was limited due to Brody Cooper being in a yellow jersey. If we had let him play unprotected, he would have run for 150 yards in the first half and that would have helped open some things up for us.

I didn’t do a good job of getting extra people in the game. I would have liked to get film on a couple of more kids. Hopefully this week we will get a couple kids back from injuries, and we are working to clean up some things on both sides of the ball.”

Dade failed to score in the scrimmage but managed 158 yards of offense. Most of that, 127 yards, came by throwing the football. Brodie Cooper completed 16 of 24 passes and had one interception.

Brandon Willerson had six carries for 22 yards and Cayden Cooper had 11 carries for 20 yards to lead the ground game.

Overall, Dade had a good outing against the bigger and faster Ringgold Tigers and got some good game experience before this week’s season opener.

The Wolverines open the season Friday night at home against the Gordon Lee Trojans with kickoff set for 7:30 p.m. Get out and support the Wolverines as football season gets underway.