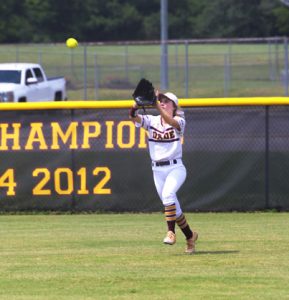 Photo courtesy of Rusty Cooper
Olivia Tierce keeps her eye on the ball as she prepares to make the catch in center field for the Lady Wolverines.

In the scrimmage game at Trion the Lady Wolverines got off to a fast start as they scored two runs in the top of the first inning and then added another in the second to take a 3-0 lead.

Trion would come back with a run in the fourth inning and then tied the game with two runs in the fifth. After a scoreless sixth inning the game ended in a tie, 3-3.

On Thursday the Lady Wolverines traveled to Ringgold to open the 2021 season. Ali Thompson opened the game with a single and advanced to third on a single by KK Castleberry. Thompson then scored on a ground out to give Dade a 1-0 lead.

In the third inning Thompson led off with a single and scored on a single by Alyssa Wilson to put the Lady Wolverines up 2-0.

That would be all the scoring for DCHS however as the Lady Tigers tied the game in the bottom of the third with a pair of runs and then took the lead in the fifth when they scored two more and ended up taking the win 4-2.

Thompson led the Lady Wolverines with three hits and two runs scored while Kayleigh Warnock and Olivia Tierce had a pair of hits each. Castleberry, Wilson, and Kaitlyn Stinnett all had hits as well.
Warnock took the loss pitching six innings and giving up just one earned run, walking four and giving up six hits.

On Saturday the Lady Wolverines hosted the Ridgeland Lady Panthers in the first home game of the season. It was supposed to be a doubleheader but in the bottom of the fourth inning heavy rain moved in and ended the game.

Dade opened the game at full strength as all three of the injured players returned to action.

Thompson led off the third straight game with a single and later scored on a double by Kami Counts.

Counts then scored on a single by Stinnett and the Lady Wolverines are up 2-0.

The Lady Panthers picked up a run in the second inning to cut Dade’s lead in half, 2-1.

The Lady Wolverines responded in the bottom of the third when Stella Henry singled and later scored on a wild pitch to put them up 3-1.

The in the bottom of the fourth Raegan Page led off with a double, moved to third on a sacrifice but was out a home as she attempted to score on a fielder’s choice.

With two out and one on in the bottom of the fourth the rains came and ended play for the day.

The Lady Wolverines out hit the Lady Panthers 5-3 as Thompson, Henry, Counts, Stinnett and Page all had hits.

This week the Lady Wolverines played at LaFayette on Monday and at Armuchee on Tuesday. The team will play in the Dalton Tournament starting on Friday with game times to be announced.

The Lady Wolverines next home game will be on Monday and Tuesday, Aug. 16 and 17 against Gordon Lee and Fannin County. The Fannin game will be the first Region 7-AA game of the season.