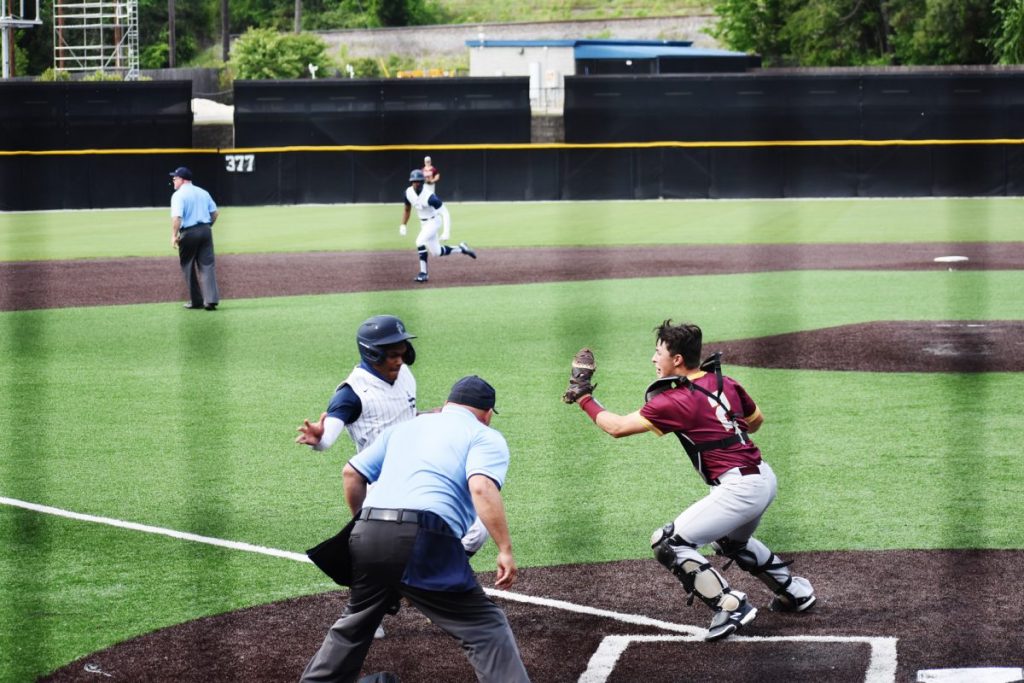 EDDY GIFFORD/Dade County Sentinel
DCHS catcher Cayden Cooper tags out the runner attempting to score from second base on a base hit ball to left field in game one against Pace Academy last Thursday.

The Dade County High School baseball team traveled to Atlanta on Thursday, April 30 to face Pace Academy in the first round of the AA state playoffs. The private Atlanta school was the winner of Region 5-AA and hosted the first round.

The Wolverines drew a walk to open the game, but three straight strikeouts ended the inning without a score.
The Pace Academy Knights got things started after one out. A single and walk put a runner in scoring position and a single to left set up a play at the plate. Brayden Nethery made the throw from left to home and Cayden Cooper made the tag for the second out.

Unfortunately for DCHS, the Knights followed that with another single, a hit batter and a three-run home run to put them up 4-0 at the end of the first inning.

Neither team was able to score in the second inning.

In the top of the third, Dade’s Eli Kimball led off with a double and later scored on a wild pitch. The Wolverines added another run after a couple of walks and passed balls to cut Pace Academy’s lead to 4-2.

The Knights came back in the bottom of the second, scoring six runs on four hits and three hit-batters, the big hit being a bases loaded triple. After three innings Pace was up 10-2.

Dade could not get anything going in the top of the fourth.

Colton Emmett came in to pitch in the fourth for Brett Kay. The Knights scored three more runs on two hits and two walks to take a 13-2 lead.

The Wolverines were retired in order in the top of the fifth and the game ended with Pace Academy claiming the win 13-2.

Kimball had the only hit for the Wolverines, a double.

After a thirty-minute break the teams faced off again, this time the Wolverines were the home team.

A walk to the leadoff hitter was followed by a hard-hit line drive caught by Landon Williams who threw to first for a double play to end an early threat by the Knights. Another walk and a fly ball out ended the inning.

Swader singled in the first, but Dade was unable to score, and the game was tied 0-0 after one inning of play.

A leadoff single followed by a walk led to two Pace runs in the top of the second, aided by a wild pitch and passed ball to give them a 2-0 lead.

The Wolverines were retired in order in the bottom of the second.

In the third the Knights added another run on an error, walk and double to increase their lead to 3-0.

DCHS batters were retired in order again in the bottom of the third and neither team was able to score in the fourth as the score remained 3-0.

In the fifth the Knights added another run on a pair of Wolverine errors followed by a single to give them a 4-0 lead.

Dade went down in order again in the bottom of the fifth before Pace exploded in the top of the fifth.

A walk and a Wolverine error started the fifth for the Knights. That was followed by two more walks to score one run and then a grand slam home run scored four more.

Nethery came in relief of Swader with no outs and gave up two hits and a run and struck out three. Pace Academy had a 10-0 lead heading into the bottom of the sixth inning.

The Wolverines were retired in order again and the game ended with the Knights claiming the 10-0 win and the sweep to advance to the next round.

Nethery pitched one inning giving up one run on two hits striking out three and walking two.

Swader had the only hit for the Wolverines, a first inning single.

With the loss the Wolverines season came to an end. The finished a season filled with adversity but always played had and worked to get better.

The players and coaches are to be commended for a successful season, advancing to the first round of the state playoffs.

Coosa was also eliminated in the first round while Pepperell and Model both advanced to the second round. They both will be playing again later this week.