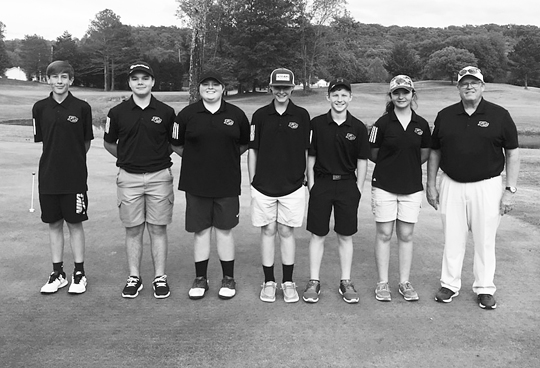 The NGAC, comprised of eight middle schools in north Georgia, was held at LaFayette Golf Club.

Kooper Knight and Mason Weathers both finished in the top 10 of the tournament, earning all-tournament status. Knight shot a 53 and Weathers shot 54 over nine holes. Weathers was also recognized as the 2021 All-Region representative for Dade Middle School.

Most of this year’s roster was comprised of first-year golfers and all but two will hopefully be returning next season.

Avery Flatt and Luke Rosenbalm are both eighth graders who will have an opportunity to contribute to the varsity golf program next year at Dade County High School.

The Wolverines finished the season with a record of 7 wins and 6 losses in tri-matches.

Coaches Stan Gibby and Alicia Bell are thankful to Jim Holloway and his staff at Trenton Golf Course for their support of the golf program at Dade Middle School.

Trenton Golf Course provides middle and high school golfers with an excellent course and practice facility and are instrumental in the development of young golfers in this area.

Of course, a golf season would never be possible without the commitment and encouragement of parents. Providing transportation to both practices and matches, as well as emotional support throughout the season, has given these young golfers the chance to develop a love for the game of golf that hopefully, will last a lifetime.