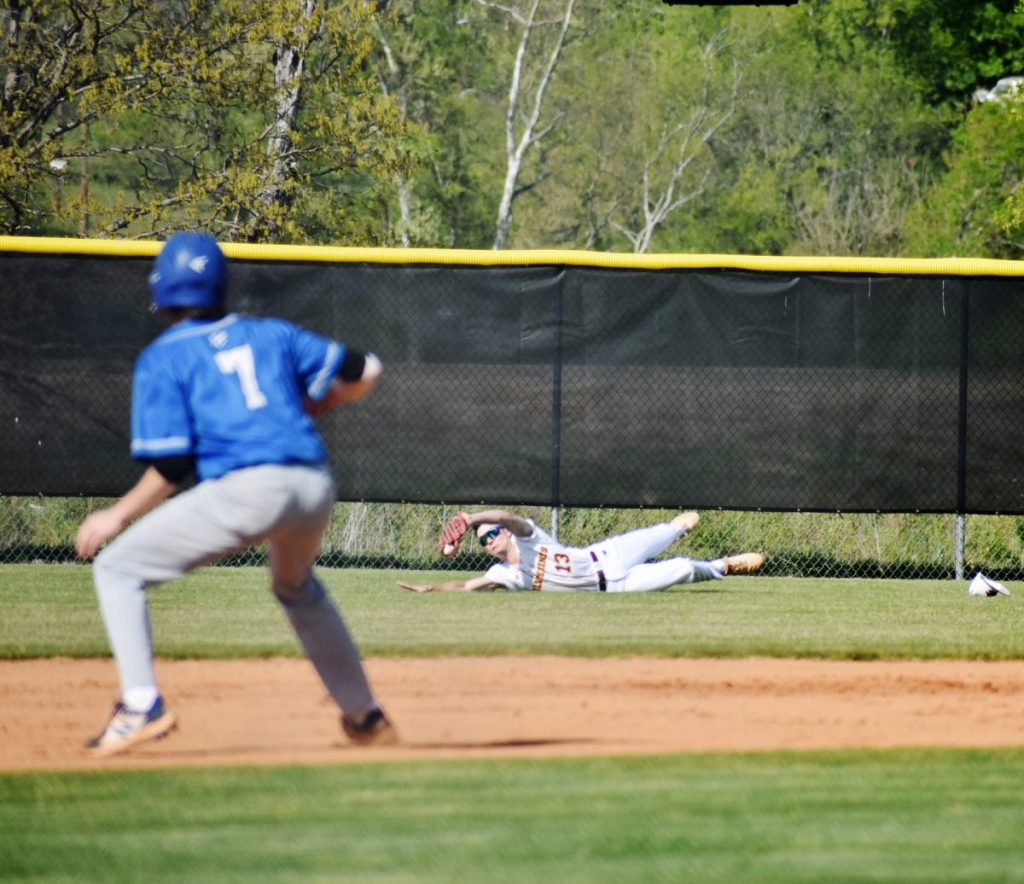 EDDY GIFFORD/Sentinel Sports
Dade County center fielder Kaden Moore makes a diving catch in last week’s game against the Model Blue Devils. Dade will travel to Atlanta tomorrow to face Pace Academy in the first round of the state playoffs.

The Dade County High School Wolverine baseball team had a three-game series with the Model Blue Devils last week and the outcome had a big impact on the final Region 7-AA standings and the seeding for the upcoming state tournament.

Before Monday’s first game of the series DCHS was tied with Pepperell for first place with Model in third and Coosa sitting in fourth.

Model opened the game with a single and followed that with a walk, but Wolverine ace Brett Kay fought back and got a fly ball out and then a pair of strikeouts to end the inning without a Blue Devil score.

The Wolverines managed one base runner in the bottom of the first but was unable to score and after one it was 0-0.
The second inning was a disaster for Dade. Three straight walks opened the inning. Then two errors, a ground out, and two hits plated five runs for Model to give them the lead, 5-0.

The Wolverines failed to score in the bottom of the second and the Blue Devils added three more runs in the top of the third on four hits to increase the led to 8-0.

Dade rallied back in the bottom of the third when they scored four runs on two walks and two hits, the big blow was a triple by Landon Williams to cut the Blue Devil led to 8-4.

The Wolverines inched closer in the fourth when they scored one run on one hit to make it 8-5.

After a scoreless sixth inning Model scored a run in the top of the seventh to make their lead 10-6.

In the bottom of the seventh Dade loaded the bases with no outs on a hit, fielders’ choice, and two walks. Another walk scored one run, but the next two Wolverines struck out to end the game with Model claiming a 10-7 win.

Kay suffered his first loss of the season, pitching two innings, giving up seven runs on eight hits. The Wolverines committed six errors in the game as well.

Williams had the big hit for the Wolverines, a triple and three RBI’s while Colton Emmett had two hits, one RBI, and scored one run.

On Wednesday, the Wolverines traveled to Model for the second game of the series.

Not much can be said about the game as Dade was no-hit by the Blue Devils’ Edwards who pitched six innings striking out 11 and walking one.

Model put the game away in the final two innings scoring four runs in the fifth and sixth innings and won 11-0.

On Friday, the Blue Devils were back in Trenton for the final game of the series.

The first two innings were scoreless but in the third Model scored the first run of the game on a triple after the lead off hitter walked. They then added two more runs on a hit batter and single to take a 3-0 lead.

The Wolverines scored their first run of the game in the fourth on a walk, single and passed ball to cut the Blue Devils lead to 3-1.

Model got that run back in the fifth when they scored on two walks, a hit batter, and a fielder’s choice to go up 4-1.
The sixth inning was not kind to Dade when they gave up two runs on one hit and three errors to secure the win for the Blue Devils, 6-1.

The Wolverines managed just three hits, one each by Kaden Moore, Emmett, and Eli Kimball.

The Wolverines ended the regular season with a 12-6 Region 7-AA record and fourth seed in the upcoming state tournament.

They will travel to Pace Academy, the top seed in Region 5-AA on Thursday for a double-header with a third game, if necessary, to be played on Friday, also at Pace Academy.

The address for the field, which is not on the Pace Academy campus, is 5700 Riverview Road SE, Mableton.

The first game of the double-header is scheduled to start at 4:30 p.m. with the second game to follow.

Good luck to the Wolverines as they travel to Pace Academy.