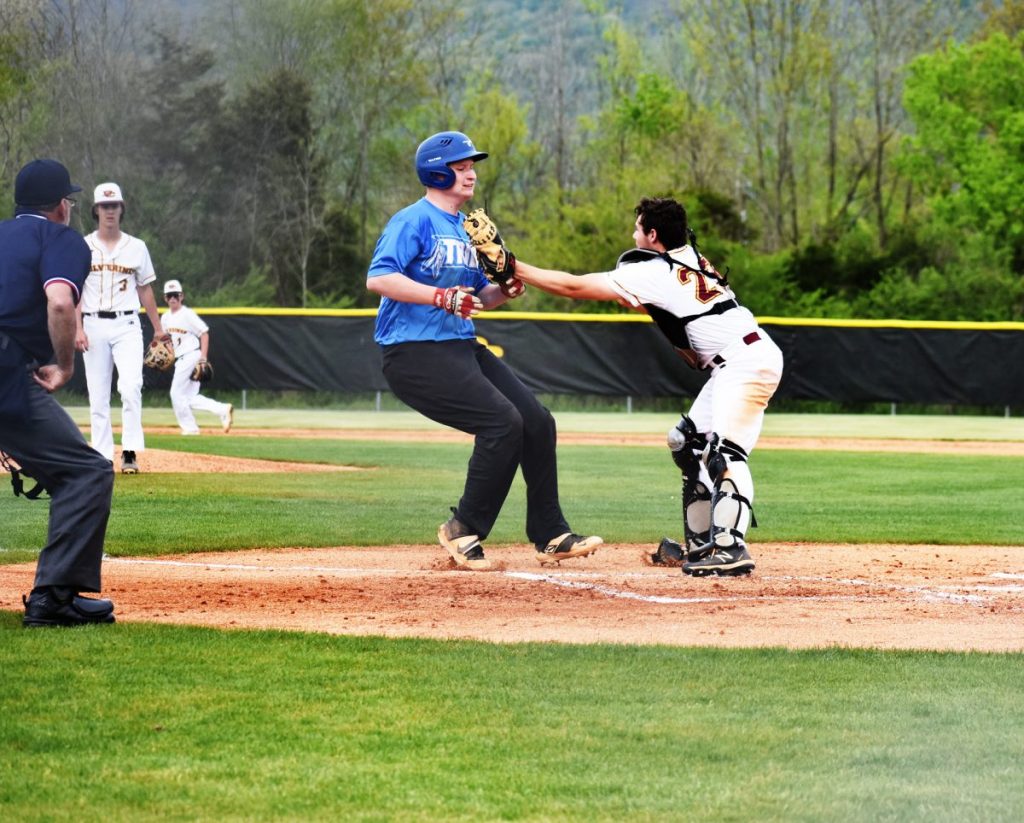 EDDY GIFFORD/Dade County Sentinel
Wolverine catcher Nolan Heath tags a Gordon Central runner out at home in last Fridays game. Dade swept the Worriers in the series. The final regular season home game will be this Friday night at 5 p.m.

The Dade County High School Wolverine baseball team had a busy week last week by traveling to Gordon Central on Tuesday, April 12 for the first game of their three-game series.

DCHS took the early led when they scored a run in the top of the first inning. Then after a quiet second inning the Wolverines pushed three runs across the plate in the third, fourth, and fifth innings to make it a 10-1 game. The Warriors managed to score a run in the third inning.

Nolan Heath led the Wolverines with three hits, scoring four runs and driving in a run. Brodie Swader had two hits and four RBI’s while Landon Williams had a hit and two RBI’s.

Brett Kay picked up the win going two innings and giving up one unearned run while striking out two. Swader and Colton Emmett pitched two innings each to close out the game for Dade.

On Wednesday, the Wolverines were at home against Fannin County for a game that was rained out earlier in the season. DCHS won the first two game of the series and was looking for the sweep.

The Wolverines took the lead in the first inning when they pushed across a run after getting the Rebels in order in the top of the inning.

The Wolverines took control in the second inning, scoring five runs on the Rebels, and taking the lead 6-0.
In the third inning Fannin County managed their only real offense of the day when they scored two runs to cut Dade’s led to 6-2.

The hot–hitting Wolverines were not phased however and answered with three more runs in the bottom of the third to push their lead to 9-2.

After a scoreless fourth inning Dade put three more runs on the board in the bottom of the fifth to end the game 12-2.

Kay picked up another win for the Wolverines, pitching five innings, giving up six hits and two runs while striking out five.

Kaden Moore led the Wolverines with three hits. Heath, Kay, Emmett, and Eli Kimball all had two hits in the game.

On Friday, the Gordon Central Warriors came calling for the final two games of their series.

After an easy win at Gordon Central on Tuesday the Wolverines struggled in this one, trailing after three innings of play, 1-0.

DCHS finally got things started in the fourth inning when they scored three runs to take a 3-1 lead over the stubborn Warriors.

The Wolverines then added a run in the bottom of the fifth, but Gordon Central kept battling and added a run of their own in the top of the sixth to made it 4-2.

Dade scored again in the bottom of the sixth to make it 5-2 and then set the Warriors down in order in the top of the seventh to secure the hard fought 5-2 win.

Kay led the Wolverines with two hits and two RBI’s and Swader also had two hits, one RBI and one run scored.

In the second game of the doubleheader the Wolverines again got off to a slow start against the winless Warriors and after two innings of play the game was tied 0-0.

In the bottom of the third Dade exploded for seven runs to take the lead, 7-0.

In the fourth inning the Wolverines outdid themselves as they put up eight runs and ended the game 15-0. If a team has a 15-run lead after four inning the game is called.

Brayden Nethery picked up the win, pitching four innings, giving up just two hits and striking out three and walking one.

Heath, Kay, Moore, Landon Williams, and Jax Guinn all had hits for the Wolverines as well.

A big series was set to start on Monday afternoon when the Model Blue Devils come to Trenton for the first game. DCHS will travel to Model on Wednesday and the final game will be at Trenton on Friday. All three games are set to start at 5 p.m.

Heath, the team’s catcher is questionable for the series after being hit by a pitch in the last game against Gordon Central.

The winner of the series, the final regular season games, will finish second in Region 7-AA while the loser will finish third or fourth. Both teams will make the state playoffs that will start next week. Game times and opponents will be announced after the final games.