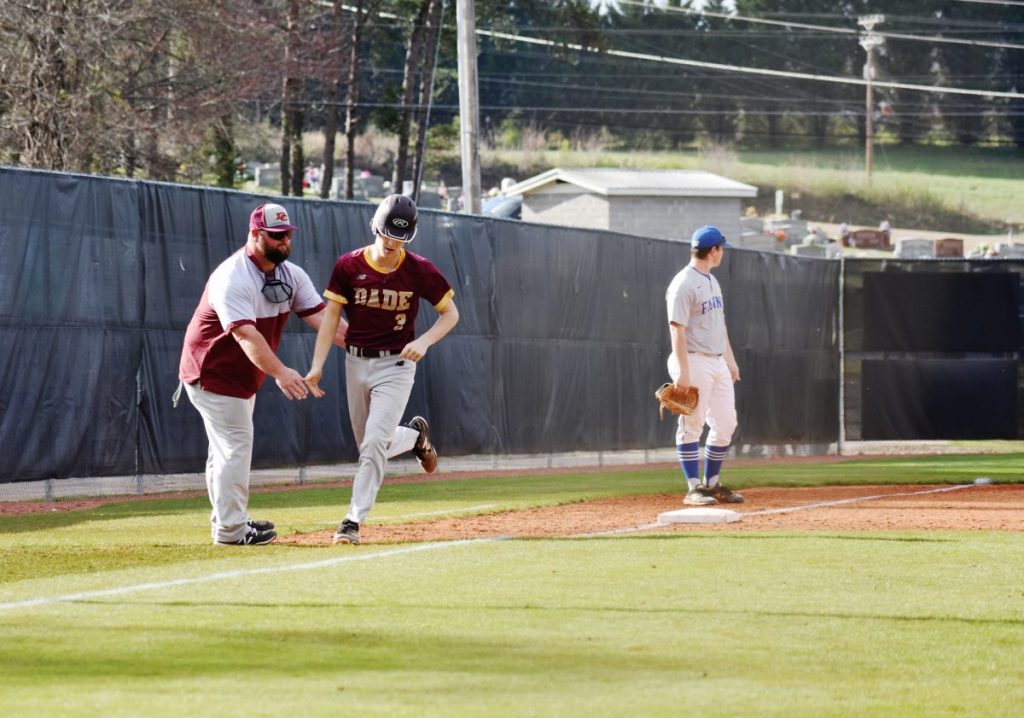 EDDY GIFFORD/Dade County Sentinel
Brodie Swader is congratulated by Coach Chris Brown as he rounds third base following the three run homerun he crushed against the Fannin County Rebels.

Dade got off to a good start as Brett Kay set the Rebels down in order in the top of the first inning.

Fannin County tied the game in the third inning when they scored a pair of runs with two out on three hits.

The score remained tied until the fifth inning when Swader drew a walk with one out, Kaden Moore singled, Colton Emmett walked, Landon Williams walked to score Swader, and Brayden Nethery hit a sacrifice fly to score Moore and the Wolverines were back on top 4-2.

Kay picked up the win pitching seven innings, giving up six hits and two runs while striking out six and walking one.

The second game of the series was played at Blue Ridge on Wednesday, March 24 and the Wolverines again got off to a fast start.

Nolan Heath reached on an error to start the game. Brett Kay had a sacrifice bunt to move him to second, Brodie Swader double to score Heath, Kaden Moore doubled to score Swader, and the Wolverines had a 2-0 lead in the top of the first inning.

The Rebels went in order in the bottom of the first and Dade went to work in the top of the second.

With two outs Nethery singled, Heath doubled to score Nethery, Kay walked, and Swader hit a three-run homer to put the Wolverines up 6-0.

The Wolverines were not finished as Moore doubled, Colton Emmett reached on an error, Landon Williams singled and Zeke Wheeler doubled. When the final out of the inning was made DCHS had scored seven runs, all with two out, and lead 9-0.

The Rebels pushed a run across in the third inning, but the Wolverines answered with two more in the fourth inning on four walks and an error to build their lead to 11-1.

Fannin County picked up a pair of runs in the fifth inning and a single run in the sixth and seventh to cut into Dade’s lead, but it was not enough as the Wolverines claimed another big region win 11-5.

Swader had a big day with two hits and five RBI’s and picked up the win pitching five innings giving up three runs, three hits and striking out six and walking three.

Heath and Moore had two hits each as well. Emmett, Williams, Wheeler and Nethery all had hits for the Wolverines as well.

The third game of the series was rained out on Friday and will be rescheduled.

This week the Wolverines traveled to Summerville on Monday to face the Chattooga Indians. They will be at home

today to face the Indians and then travel back to Summerville on Friday for the third game of the series.

Monday and Friday games are set for 5:30 p.m. while the Wednesday game is set for 5 p.m.

Wolverines Suffer Their First Region Loss Of The Season At Chattooga