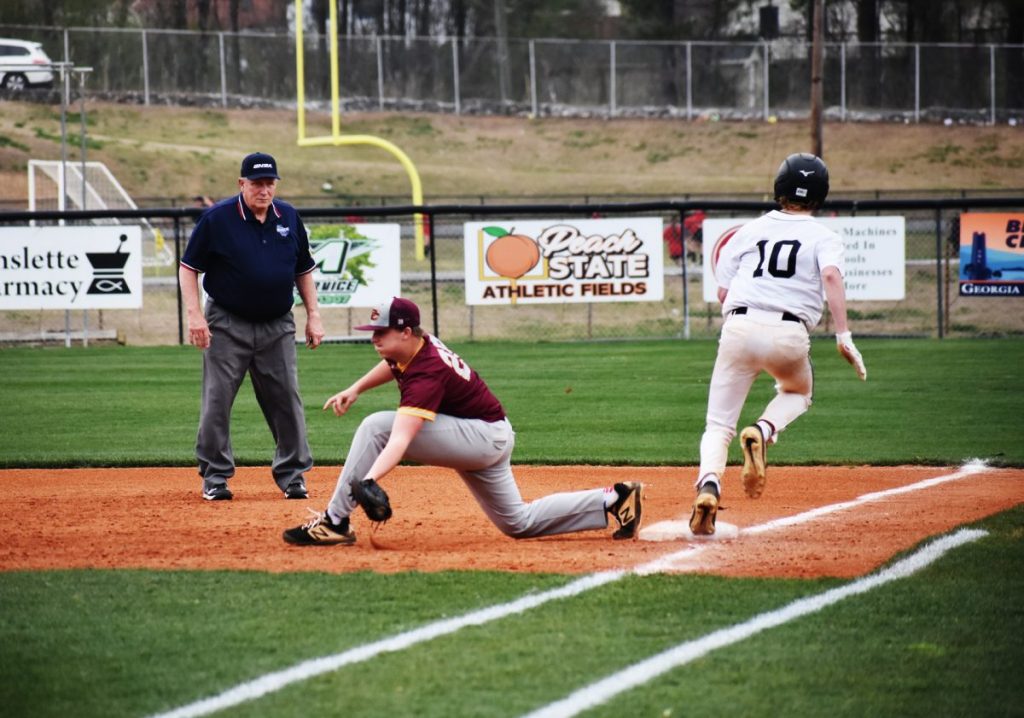 EDDY GIFFORD/Dade County Sentinel
Colton Emmett scoops the ball for the out at first in last weeks game at Coosa. Dade won the series against the Eagles 2-1 to begin region play. The Wolverines will travel to Fannin County today and then host them on Friday with first pitch at 5 p.m.

The Dade County High School Wolverine baseball team opened Region 7AA play last week when they traveled to Coosa High School to face the Eagles in the first game of a three-game series. All region games will be three-game series with games on Monday, Wednesday, and Friday.

The first inning was scoreless but in the top of the second inning DCHS took the lead with three runs on a single, three walks and two errors.

The Eagles scored a pair of runs in the bottom of the fifth to cut Dade’s lead to 6-2 but that would be the end of their scoring. The Wolverines added another run in the seventh to take the first game victory 7-2.

Brayden Nethery led Dade with three hits and scored two runs while Nolan Heath had a pair of hits.

The second game of the series was scheduled to be played at Dade on Wednesday but was postponed due to all the rain, so a doubleheader was scheduled for Friday at Coosa.

In the first game it turned out to be a pitching dual as both teams struggled to get base runners.

After four scoreless innings Nethery led off the fifth with a single, the Wolverines first hit of the game. Heath singled, and Kay singled to score Nethery with the game’s first run.

Dade scored again in the top of the sixth, this time without a hit. Two walks, an error and hit batter gave the Wolverines a 2-0 lead.

The Eagles pushed across a run in the bottom of the seventh on two hits but that would be all they could get, and DCHS claimed the game and the series.

The Wolverines managed just the three hits ­– all in the fifth inning.

The Coosa’s Thacker took the loss pitching 5.1 innings giving up three hits, two runs (one earned) and striking out 11.

In the second game of the doubleheader Dade fell behind early and was unable to recover.

With two outs in the second inning Coosa scored five runs on four hits and a walk to take the lead and never trailed in the game.

In the third inning Heath and Kay singled while Swader doubled to score two and get the Wolverines back in the game.

The Eagles scored two more in the fifth followed by two Dade runs in the bottom of the fifth to make it a 7-4 game but that would be as close as they would get.

Coosa added runs in the sixth and seventh to take a 9-4 win, but DCHS took the series two games to one.

Heath and Swader led the Wolverines with three hits each. Nethery took the loss, pitching five innings giving up seven hits and striking out three while walking one.

This week the Wolverines are scheduled to face Fannin County. The first game was at Dade on Monday and then DCHS will travel to Blue Ridge on Wednesday with the third game being at Dade on Friday.