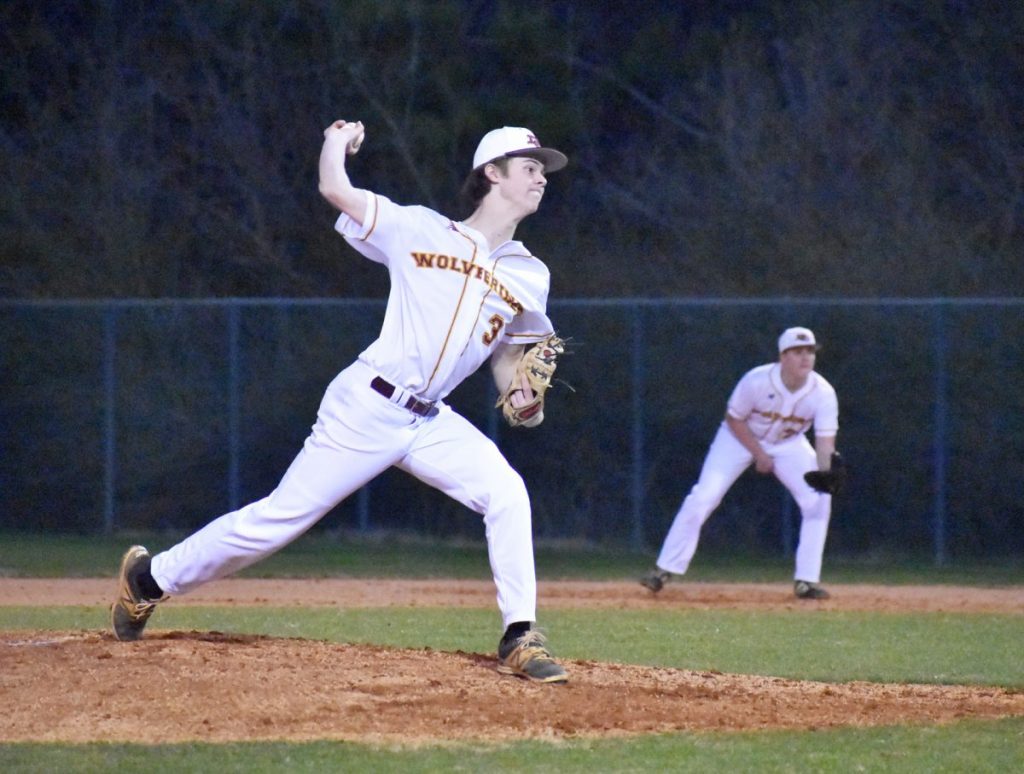 EDDY GIFFORD/Dade County Sentinel
Junior Brodie Swader picked up the win on the mound last Thursday against North Sand Mountain. The Wolverines will be at home Thursday afternoon when they host North Jackson.

The Dade County High School Wolverine baseball team traveled to Stevenson, Ala., on Tuesday to face the North Jackson Chiefs in a non-region game.

DCHS struggled to hit the ball and struggled on defense, making four errors, and giving up 10 runs in the five-inning game.

The Wolverines, missing four players due to basketball, continued to play a lot of freshman and while improving the competition has been tough so far.

Kaden Moore picked up the only Wolverine hit but they had several hard-hit balls directly at Chief players while the North Jackson pitchers did not walk anyone.

On Thursday, the Wolverines hosted North Sand Mountain in their first home game of the season. Dade’s lineup looked different as the basketball players joined the team after their final game on Wednesday.

The Wolverines fell behind in the first inning when the Bison scored a run with two outs on four consecutive walks.
DCHS scored their first runs of the game in the bottom of the third inning when Dylan Dwyer singled to start the inning and an error on a Nolan Heath bunt scored Dwyer to tie the game, 1-1. Heath scored later in the inning on a pass ball to give the Wolverines a 2-1 lead.

Dade put together a big rally in the bottom of the fifth inning when with one out Colton Emmett is hit by a pitch, Moore then walks and both runners advance on a pass ball. Landon Williams walked before Emmett scores on another pass ball.

Brayden Nethery followed with a single and two RBI’s to put the Wolverines up 5-1. Eli Kimball singled to score Nethery and Dwyer walks. Heath reaches on an error before Brodie Swader singles to score Kimball. Heath gets a pinch runner, Eli Stallings who scored on an error by the catcher and Swader and Brett Michael Kay score on pass balls. Emmett singled, and the Wolverines were up 11-1, and the ball game ended on the 10-run lead after five rule.
Swader picked up the win pitching 2.1 innings giving up no hits and striking out three and walking one. Kay pitched 2.2 innings giving up one run, one hit, striking out five and walking five.

The Wolverines will be back in action Thursday when they host North Jackson and then travel to Trion on Saturday to face Darlington and Trion. Thursday’s game is set to begin at 5 p.m. while Saturday’s first game starts at 10 a.m.