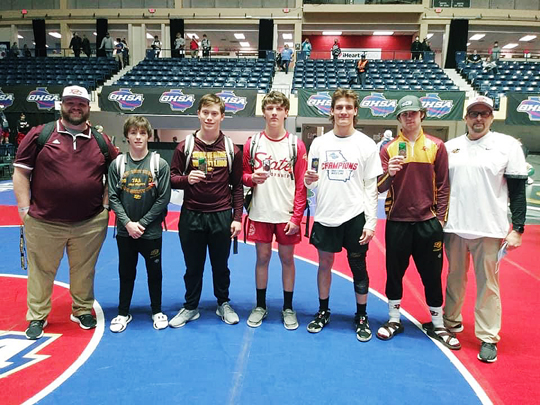 Dade County wrestlers ended their season this past week at the GHSA Traditional State Tournament in, Macon. The Wolverines took 11 wrestlers to Macon, and five of them ended their tournament on the podium, and the team finished seventh in team points.

Highlighting the trip to Macon was junior Cody Williams who earned his third consecutive trip to the finals at 182 pounds. Cody was so dominate in Macon that he did not allow a single point to be scored against him.

“When we looked at his side of the bracket, we were concerned with match ups against Dodge County and Haralson County, but Cody dominated both of those matches. I can honestly say no kid was more deserving of a championship than Cody, and no kid, at any classification, was more impressive,” Coach Jeff Poston said.

Every single Wolverine wrestler won at least two matches in Macon. Brandon Willerson avenged a loss he suffered against Vidalia at the State Dual Championship. Cayden Cooper lost in the blood round, Garret Dunn, Dakota Whitmore, Eli Johnson, and Hayden Langley all lost two rounds prior to placement rounds.

“I’m extremely proud of the season we had. Obviously, we did not want to settle for seventh place, and we can definitely improve the number of kids we have placing next season, but at one point we did not know if we would even have a season. We lost two wrestlers right before Traditional to injuries, and both of those guys would have been placers, so we have some good momentum heading into our off season,” Poston added.

Congratulation to the Wolverine wrestling team on a fine season and a bright future is ahead as they lose only one senior from this year’s team.