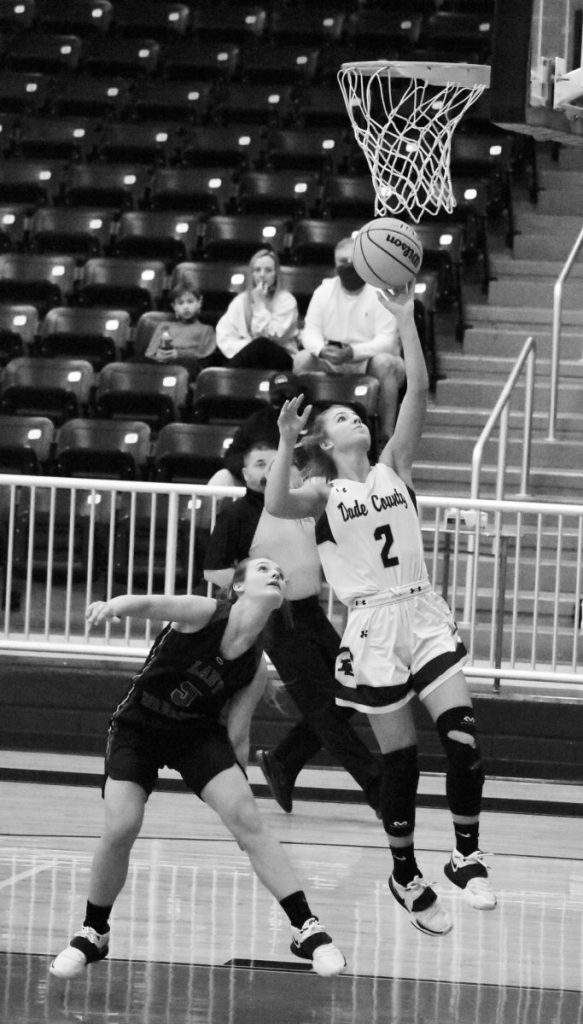 DCHS entered the game having defeated the Lady Indians twice in the regular season.

The teams exchanged the lead several times early before Chattooga opened up a three-point lead at the end of the first quarter, 14-11.

With defense dominating play the teams struggled to score and at the end of the first half the Lady Indians held a five-point lead, 28-23.

The Lady Wolverines played much better in the third quarter, outscoring Chattooga 19-14 to tie the game 42-42 heading into the fourth quarter.

The fourth quarter would be a disaster for Dade as they managed just three points and the Lady Indians came away with a big upset win, 54-45.

The Lady Wolverines kept themselves in the game from the free throw line hitting 14 of 17 for 82.4 percent but hit just 28.6 percent of their field goals (only 15 percent of three-point shots, 3 of 20).

On Thursday night the Lady Wolverines traveled back to Summerville to face the Gordon Central Lady Warriors in the consolation game.

Dade picked up where they left off on Wednesday from a shooting standpoint and fell behind the Lady Warriors in the first quarter, trailing 15-9.

They got it together in the second quarter however, and by the end of the first half had built a 26-18 lead.

Shooting woes hit both teams in the third quarter but the Lady Wolverines managed to add to their lead and were up 33-25 heading into the fourth quarter.

Dade dominated play the remainder of the game and came away with a big 48-28 win and the third seed for the first round of the State Tournament.

The host school sets the COVID guidelines and they are as follows: The only people allowed in our gym will be the head coach, assistant coaches with GHSA basketball season pass; visiting team members listed on a team roster(maximum 20 including players, managers, camera operator, and bookkeeper); security in uniform; athletic trainer – with identification; school administrators with a GHSA Pass; and the driver of the team bus.

You will be able to listen to a live radio broadcast on WKWN (1420AM, 101.3FM, or by downloading the WKWN APP on our phone).