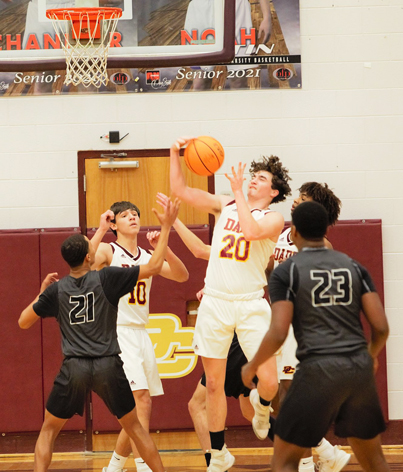 Contributed photo
Brett Kay grabs a rebound for the Wolverines in recent action. DCHS is currently tied for third place with Coosa who they were scheduled to face Monday night. They will be in action on Thursday in the Region 7-AA Tournament at Chattooga High School in Summerville.

The Dade County High School Wolverine basketball team was back in action last Friday night when they traveled to Summerville to face the Chattooga Indians who are sitting on top of Region 7-AA.

The Indians defeated the Wolverines earlier in the season in a close game in Trenton.

Chattooga came out smoking this time and quickly built a 10-point lead as the Wolverines got off to a slow start and at the end of the first quarter it was 22-12.

Dade picked up the pace in the second quarter, but the Indians did not slow down any and at the end of the first half they had built their lead to 16-points, 44-28.

The pace slowed some in the third quarter, but the Wolverines were unable to make much headway towards cutting into Chattooga’s lead, outscoring them 13-12 but still trailing 56-41 heading into the fourth quarter.

The Indians showed why they are in first place in region as they coasted to an easy 76-59 win over Dade.
Brodie Swader led the Wolverines with 17-points with David Cole scoring 13 and grabbing eight rebounds.

The Wolverines are currently tied with Coosa for third place in Region 7-AA with two games left. The Wolverines travelled to Coosa on Monday night and will host Fannin County tonight, Feb. 10 in the final home game of the year.

Check our website, dadecountysentinel.com, Thursday for the Wolverines’ game time and opponent.