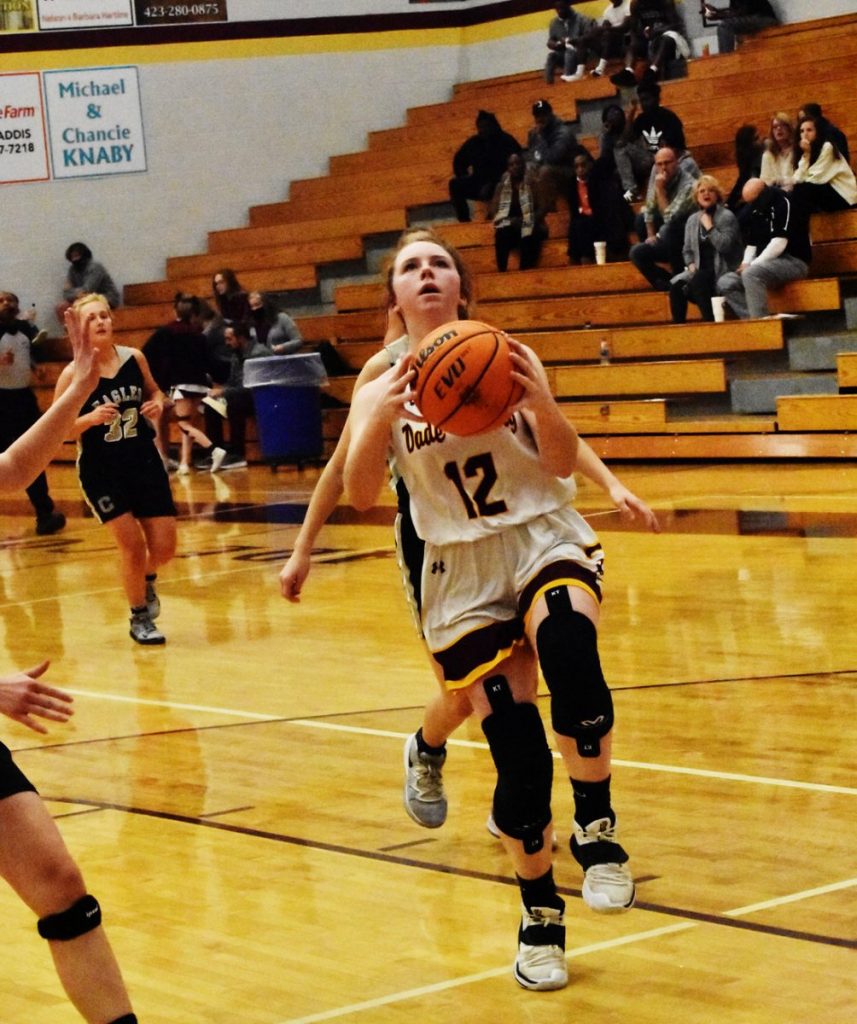 EDDY GIFFORD/Dade County Sentinel
Lady Wolverine Ali Thompson goes to the basket in recent action. Thompson led the Lady Wolverines with 19 points last week against the Chattooga Lady Indians as they took the win and all but locked up second place in Region 7-AA and a first-round bye in the upcoming region tournament.

By EDDY GIFFORD
Sports Writer
The Dade County High School Lady Wolverine basketball team traveled to Summerville last Friday to face the Chattooga Lady Indians in a game that would determine second place in Region 7-AA as the season winds down.

A win by the Lady Wolverines would give them a season sweep of the Lady Indians with two games remaining so a victory on Monday, Feb. 8 over winless Coosa would wrap up second before a showdown with first place Fannin County tonight.

Both teams were sluggish in the first half as DCHS had trouble finding their shooting range and trailed 11-10 at the end of the first quarter.

The Lady Indians had an opportunity to build on that lead in the second quarter as the Lady Wolverines managed just six-points, but they managed just 10 but still lead at the end of the first half, 21-16.

The pace picked up in the third quarter, but Dade still struggled and was unable to take the lead and heading into the fourth quarter were down by seven-points, 38-31.

The lights came on for the Lady Wolverines in the fourth quarter as they scored 19 points while the defense picked up as well holding Chattooga to just six and came away with a 50–44 road win.

Ali Thompson had a big night as she led DCHS with 19 points, followed by Stella Henry with 11 and Jayda Wood with 10.

The Lady Wolverines are hosting Fannin County tonight to close out the regular season.

The Lady Wolverines get a first-round bye in the Region 7-AA Tournament that assures them a spot in the State Tournament. Their first region tournament game will be on Tuesday, Feb. 16 at 4 p.m. at Chattooga High School in Summerville. A win there would put them in the championship game on Thursday, Feb. 18 at 7 p.m.

See next week’s Sentinel or check our website, dadecountysentinel.com, for opponents as they are to be determined this week.