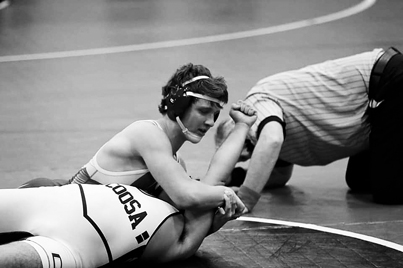 Photo courtesy of Region 7-AA Sports Facebook Page
Landon Williams (195) was named Area champion in last week’s Traditional Area Wrestling Tournament and advanced to the state tournament along with 10 of his teammates. Williams is pictured pinning one of his opponents during the Region tournament.

The Dade County wrestling team began the individual portion of the season this past Thursday night at Chattooga. The Wolverines took 12 wrestlers to the Traditional Area tournament, and all 12 of the wrestlers placed in the top four of their respective weight class. The Wolverines were missing J.W. Ellis at 126 due to an injury, and Ellis would have been favored to win his weight class.

In an ordinary, COVID free year, the top four placers at Area move on to sectionals before advancing to the state tournament in Macon. This year the top three in each weight class advance directly to Macon, so Dade County will be taking 11 wrestlers to Traditional State Tournament. The AA portion of the tournament began yesterday, Feb. 9th, and continues today Wednesday, Feb. 10th.

Coach Jeff Poston said, “Our lineup changed a little due to injuries, and Landon Williams bumped up from 160 to 195, Cayden Cooper bumped up to 145, and Jax Guinn bumped up from 145 to 160. J.W. Ellis would have been an additional qualifier for us at 126, but he hurt himself early in the week. We’re hoping all 11 guys will score some points in Macon, and if that happens, we have a shot at a top three finish again this year.”