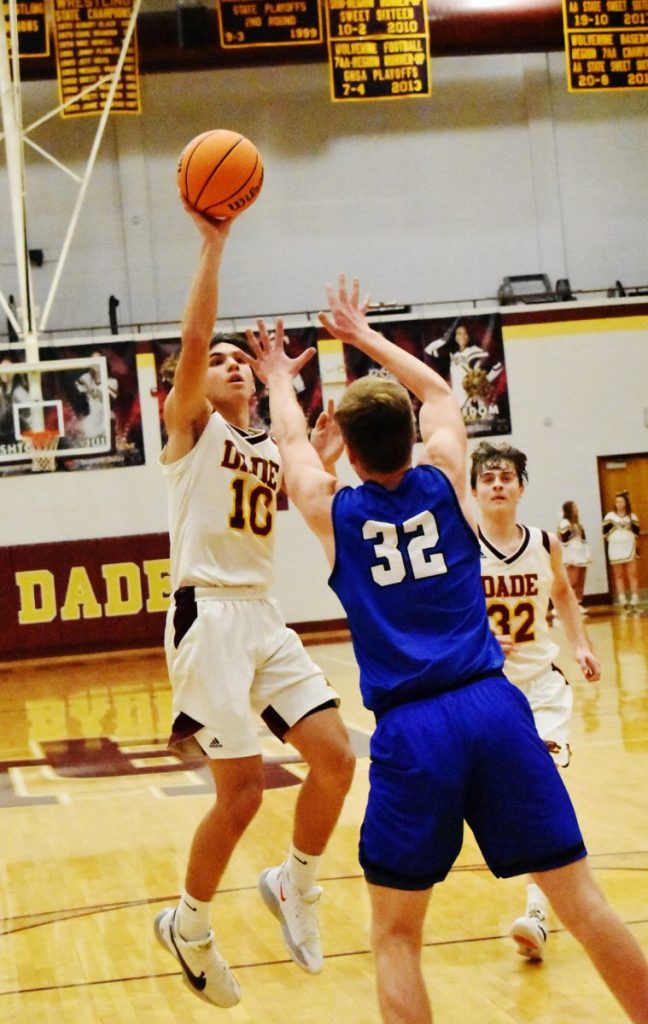 The Dade County High School Wolverine basketball team was back in action Tuesday night when they traveled to Pepperell High School to face the Dragons after a disappointing week the week before, losing two of three games.

Dade defeated Pepperell in their season opening game and looked to make it a regular season sweep. The Wolverines and Dragons played toe to toe in the first quarter with DCHS coming out on top, leading after the first eight minutes 16-15.

The second quarter would see more of the same as the two teams swapped baskets and leads the entire quarter. At the end of the first half the Wolverines held onto a two-point lead, 38-36.

The third quarter was a good one for Dade as they opened up a lead over Pepperell and heading into the fourth quarter led 59-49.

The Wolverines would continue their good play in the fourth quarter and when the game ended they claimed another big Region 7-AA win, 77-62.

David Cole led the Wolverines with 19 points, hitting five of 10 two-point shots,, two of two three-point shots and three of four from the free throw line.

Max Howard was not far behind with 14 points, hitting four of six two-point shots, and two of two three-point shots. Brodie Swader and Brody Cooper finished with 12 points each.

On Friday, DCHS traveled to Model to face the Blue Devils. After taking a big loss at home the Wolverines were looking to improve on that effort and that they did.

While the Blue Devils dominated early play the Wolverines kept batting and trailed by just six points at the end of the first quarter, 18-12.

Dade had trouble getting their shots to fall in the second quarter but so did Model and at the end of the first half DCHS trailed 29-21.

Whatever Coach Mark Whitt told them during halftime worked as the Wolverines came out in the third quarter and looked like a different team. By the end of the third quarter Dade had cut the Blue Devil lead to just one and trailed 37-36 heading into the fourth quarter.

They continued to play well against a very good Model team in the fourth quarter and when the quarter ended the Wolverines had tied the game 51-51 and headed to overtime.

Dade fell behind in overtime and were not able to catch up with the Blue Devils claiming a hard fourth 62-58 win over the never-say-die Wolverines.

Gabe Costley led Dade with 18 points followed by Makinley Everett with 15, Cole with 11, and Cooper with 10.

After a late Friday night trip back from Model the Wolverines had to load up early Saturday and head to Blue Ridge to face the Fannin County Rebels in an afternoon game.

Dade got off to a slow start and fell behind by 10-points in the first quarter, 18-8.

The were able to get things going in the second quarter and cut into that lead and at the end of the first half were down by just seven, 31-24.

The Wolverines turned up the defense in the third quarter and kept battling and at the end of the quarter trailed by just three points, 41-38.

Both teams had a good fourth quarter shooting the ball, scoring 20 points each but trading baskets wasn’t enough for the Wolverines as they dropped a hard-fought game 61-58.

They put forth a good effort and continue to improve as the season moves along. The team was led by Costley and Cooper who both had 14 points while Cole and Everett Christiansen scored nine points each.

The Wolverines will be at home this week with a Wednesday game against Coosa, Friday against Gordon Central and Saturday afternoon (4:30) against North Sand Mountain.