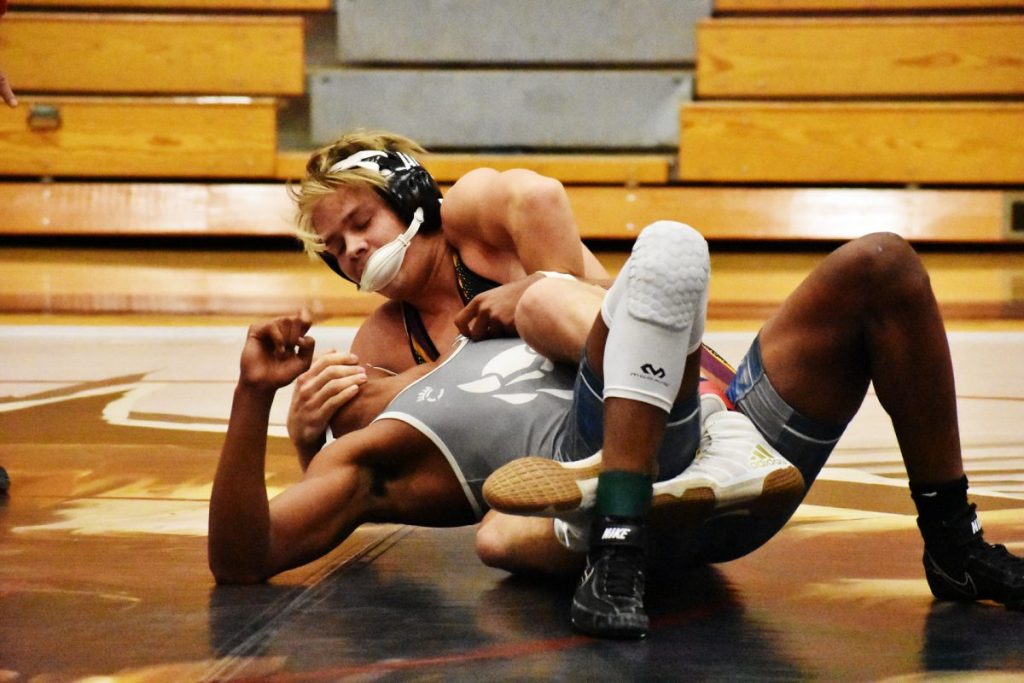 EDDY GIFFORD/Dade County Sentinel
Wolverine wrestler Eli Johnson, the only senior on this year’s team, picked up a big win Saturday in the Area Tournament. His win helped the Wolverines secure the win over Elbert County and advance to the State Duals finals at Lamar County on Saturday. Good luck to the Wolverine wrestling team.

The Dade County Wolverine wrestling team hosted the first round of the Georgia High School Association State Duals this past weekend. Dade had a bye in the first round and faced the winner of Elbert County and Union County.

Elbert County handled Union County pretty easily, setting up a rematch of last year’s consolation semifinal in Macon. This year the match up may have been the same, but the outcome was different.

The match started at the 145 weight class, and the Wolverines surprised Elbert by sending out Junior Cayden Cooper, who normally wrestles 138 pounds for the Wolverines. Cooper made short work of his opponent and opened the dual with a dominating win by fall.

Zac Smith followed Cooper’s win with a pin of his own, and after Elbert County forfeited the 160 match, Dade was up 18-0.

One of the most important matches of the dual was at 170 pounds. “Elbert County has a really good kid at 170, and we knew we had to win, or hold them to three points,” Coach Jeff Poston stated. Eli Johnson, Dade’s lone senior, started the match slowly, and found himself down 6-0 entering the second period. Johnson was able to rally in the second and tie the score up 6-6. Poston said, “We chose top in the third because we felt Eli was wearing him down, and he took care of business.” Johnson was able to get the turn for near fall points and won the match 9-6.

Dade was just getting started though.

Elbert County forfeited at 182 pounds. Poston said, “They didn’t have a kid who could give Cody a match.” Isaac Pangle put on a show at 195 pounds. Early in the match, Isaac hit a roll through cradle that brought the crowd to its feet. He would win by fall and increase the lead to 33-0.

Austin Sorrelle then added to the onslaught as he won a major decision, and the Wolverines were up 36-0.
Elbert would get the win at 285 pounds, but a forfeit at 106, and a Jake Gatlin pin sealed the deal.
Dade would ultimately win the dual 49-30.

The win propelled the Wolverines to the Elite 8 this Saturday at Lamar County High School. This is the third consecutive year Dade will compete with the final eight teams. Dade entered this year’s tournament as the number two seed and will face East Laurens in a first-round match up.

Coach Poston stated, “This has been such a crazy year. If you had told me the first week of January that we would be the two seed headed into the final eight, I would have laughed at you. This is a testament to the grit and determination these kids possess. I am extremely proud of these guys. I am also extremely grateful that our hometown crowd showed up on such a busy weekend. They made the place electric.”