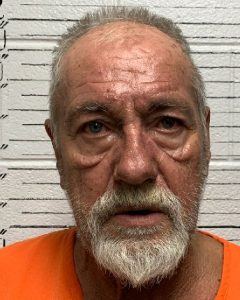 Dade County deputies were dispatched to the Mapco gas station on Deer Head Cove Road on Thursday, Sept. 22, in reference to a subject shooting at an individual in the parking lot.

Deputies responded to the scene and found that the aggressor, and the victim, had both left the scene. The only available information from witnesses was that the shooter was driving a truck that was pulling a utility trailer.

While canvassing the area, Dade County Detectives located a vehicle at another convenience store located on Highway 11 southbound that matched the description found on surveillance video from the original incident location.

Upon further investigation, it was determined that the subject was the shooter from Deer Head Cove Road.

The subject was identified as James Forester, 71, of Henagar, Ala. He was taken into custody and charged with possession of a firearm by a convicted felon and reckless conduct.

According to Detective Chad Payne, the Sheriff’s Office knows Forester’s motive for the shooting, but they cannot release details at the moment, as the investigation is still ongoing.

“I am extremely proud of my Road Patrol Deputies and Detectives. They worked together and located a shooting suspect, despite having little to no suspect information, in less than 30 minutes. Their dedication to this community is unmatched,” Sheriff Ray Cross said.

The victim has still not been located and has not contacted the Sheriff’s Office. If anyone has any information about this incident, please contact Detective Chad Payne at (706) 657-3233, cpayne@dadesheriff.com, or through the Dade County Sheriff’s Office Facebook page.