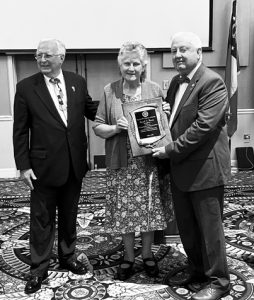 Mrs. Sarah Moore has been a prominent and influential member of the Trenton-Dade Optimist Club for 35 years. She was the very first woman to be admitted into the club in 1987 where she immediately became the secretary and treasurer of the club. I had the honor of attending the GATEway Optimist District meeting with her this month where she was awarded the highest honor of our District Club, the “Big John” Ware Optimist of the Year award.

This award was designed to recognize excellence in Optimist service and leadership and Mrs. Sarah Moore is this and so much more.

I moved back to Dade County in November of 2021 and immediately joined the Optimist Club. My father, Loyd Gass, was a charter member and my mother, Betty Gass, was also a very active member of the club. I have fond memories of attending meetings, get-togethers, and Optimist events as a child, but also have wonderful memories of spending time with Mrs. Moore. She had a huge influence on me even back then because she always had a smile on her face and was willing to help everyone she met.

Like the Optimist creed says, “to wear a cheerful countenance at all times and give every living creature you meet a smile,” this is the epitome of Mrs. Moore.

Dade County and the Trenton-Dade Optimist Club are honored to have someone like Sarah Moore and we are all so proud of her for achieving the honor of the “Big John” Ware Optimist of the Year award.

Laura Cunningham is a member of the Trenton–Dade Optimist Club.