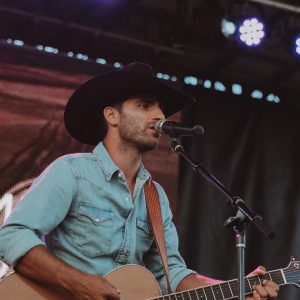 Contributed photo
Mitch Rossell, a Tennessee country singer and songwriter, is the headlining music act for this year’s 1945 Dade County Fair. Rossell has written hits including Garth Brooks’ “Ask Me How I Know.”

Planning is already underway for this July’s 1945 Dade County Fair, and the event is expected to be better than ever.

Event organizer Nathan Wooten said that planning has become a year-round thing, especially since the fair has become so big. Right now, the committee is meeting twice a month, and will pick up speed this spring.

“All in all, last year was successful. At the first event, we only had about six vendors. This time we had over 100. In that respect, it was by far the biggest. I would say we had about 5,000 people come. We hope this year is bigger and better,” Wooten said.

This year’s 1945 Dade County Fair will be Monday, July 4, at Jenkins Park, and will feature all of the usual favorites, including games, a talent show, car show, kid’s zone, a cake walk, bingo, softball tournament, and fireworks.

A silent auction will be added this year. Also, political candidates will be allowed to have booths. An information booth will also be added, where people can get maps, get tickets for the 50/50 raffles, etc.

The music lineup for the event was recently announced. The lineup includes local musician Camden Smith; Southwind Bluegrass, a Chattanooga group that has played at the fair in previous years; Katrina Barclay, Corey Layne, and headliner Mitch Rossell, a singer and songwriter from Tennessee. Rossell has written hits including Garth Brooks’ “Ask Me How I Know,” which reached number one on the charts.

“T Graham Brown [last year’s headliner] was great, but his following is all 50 and older folks. Our goal this year is to attract the younger family with kids. That is what this thing was designed for. Our goal from day one was for the event to be family friendly and free. It’s designed for those families who need something to do on the 4th of July,” Wooten said.

In its fifth year, this year’s goal is to smooth out the bumps of the event.

“As good as it was, and as smooth as it looked, we did have some issues. I got a call that the toilet paper was out in the ladies’ restroom. I’m the designated fire putter-outer,” Wooten joked.

Other issues that the committee wants to address include parking and vendor check in.

“We will stage vendor access to the park based on where they are based. The ones furthest away will come first, and we will be responsible for unloading their vehicle. The first year, everyone drove into the park. That will stop congestion, I hope,” Wooten said.

Wooten noted that parking will be moved out of the park, over to either the flea market field or around the square, and buses and/or golf carts will shuttle people back and forth. Handicap parking will be set up close by.

“One of the mistakes we made last year was not having a good knowledge of how the food vendors have to work in conjunction with the health department. We have Shannon Blom, [owner of Uncle Lar’s Outpost] to manage those food vendors,” Wooten said.

Wooten also noted that last year, all the food vendors did so well, that they sold out of food by 4 p.m.

A new addition this year to the planning aspect of the event is website 1945fair.com. Wooten encourages everyone to visit the website, where people can sign up as vendors or volunteer as well. Information can also be found on Facebook at 1945 Dade County Fair.

“The key right now is getting fundraising and contributors. Volunteers are always needed,” Wooten said.