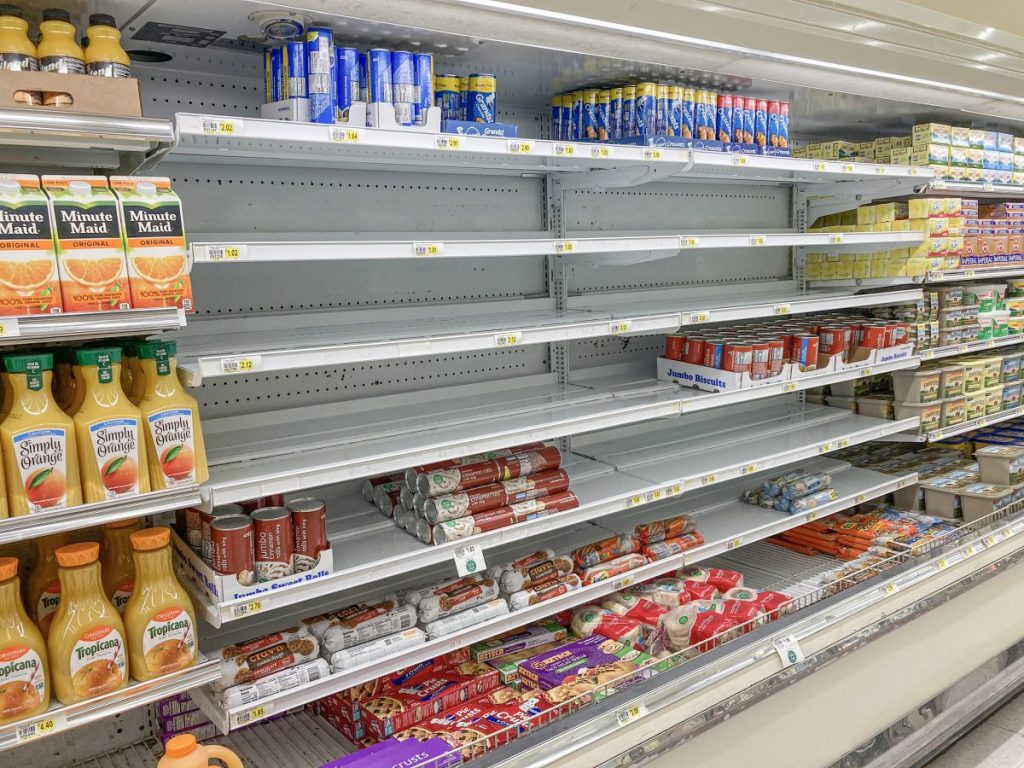 REBECCA HAZEN/Dade County Sentinel
COVID-19 has caused supply chain issues, which can be seen in the local grocery store. At Food Outlet, the canned biscuit section has been empty for over a month, according to Manager Joel Pritchett. 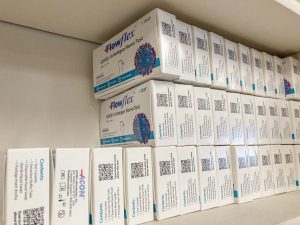 REBECCA HAZEN/Dade County Sentinel
COVID-19 rapid tests are stocked on a shelf at Price Pharmacy. Employee Mandi Dockery said that the tests are in high demand.

As the Omicron variant of COVID-19 sweeps its way across Dade County and northwest Georgia, the community is encouraged to get vaccinated and boosted.

Logan Boss, Public Information Officer of the Northwest Health District for the Georgia Department of Public Health shared the latest information available, plus new developments in the fight against COVID-19. 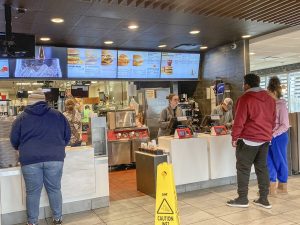 REBECCA HAZEN/Dade County Sentinel
The Trenton McDonalds’ lobby was closed for nearly a week due to staff shortages because of exposure to the Omicron variant. On Friday, Jan. 21, the lobby reopened for diners.

transmissible, that if you’re exposed to it, you’re going to get it. Ninety-nine percent of the cases that we are seeing now in Georgia, including northwest Georgia, are Omicron. Just this week we’ve seen a plateau though. This is likely related to holiday reporting delays, and winter weather impacting testing. It’s too early to say that the Omicron wave has peaked though,” Boss said.

The Omicron variant is less severe than the previous variants, but far more transmissible. People that have caught the variant have created a rise in hospitalizations.

At the Dade County Sheriff’s Office, members of the investigation office were recently affected by the virus.

“We’ve been following the CDC recommendations, as far as quarantine when it comes to an employee having a positive test and/or exposure,” Public Information Officer Chad Payne said, who noted he was recovering as well.

“We are fortunate that it hasn’t affected us to a point where we can’t reassign someone temporarily, or have other employees cover different departments, so it hasn’t caused a staffing issue this far. We have equipment that effectively disinfects the offices, that we’ve been using in the jail since the start of this,” Payne said.

Boss noted that vaccination rates in northwest Georgia are poor. Dade County is currently 32 percent fully vaccinated. An interactive dashboard can be found online at dph.georgia.gov/covid-vaccine.

According to cdc.gov, the Center for Disease Control and Prevention has recently shortened the recommended isolation time.

A press release notes that people with COVID-19 should isolate for five days and if they are asymptomatic or their symptoms are resolving (without fever for 24 hours), follow that by five days of wearing a mask when around others to minimize the risk of infecting people they encounter.

“The change is motivated by science demonstrating that the majority of SARS-CoV-2 transmission occurs early in the course of illness, generally in the 1-2 days prior to onset of symptoms and the 2-3 days after,” the press release said.

“We knew we were going to see so many cases due to Omicron. I think it was a way to address some of the issues and realities we’ve been having nationally, as well as in northwest Georgia, with worker shortages, and kids getting sick and being absent from school,” Boss said about the new guidelines.

At Dade County Schools, students had a three-day weekend because of Martin Luther King Jr. Day, but due to staff member cases, had to start the shortened week with virtual learning days.

“The main thing that led to that decision was the number of staff members that were getting sick or they had sick family members. Last week, we saw a significant increase in student cases too. We just didn’t have the operational capacity to staff the classrooms,” Superintendent Josh Ingle said.

The students returned back to in-person learning on Friday, Jan. 21, because the majority of the staff members were well enough to return.

“Staying closed on Friday might have been the easiest thing to do, buy my heart goes out to the working parents, especially those with little kids that cannot stay home alone. When school is session they rely on us to have our doors open as much as we can,” Ingle said

Last week a COVID-19 test distribution program was set up by the Biden administration. Everyone is encouraged to visit Covidtests.gov and order four free rapid at-home tests.

“Rapid tests are not easy to find unfortunately, so it is nice that they are sending them out for free. The rapid test still has a place in helping us try and fight COVID-19. We recommend that people use the rapid test as a quick check to see if they are infectious before attended a gathering of any sort,” Boss said.

Price Pharmacy in Trenton is one of the local locations where a rapid COVID-19 test can be purchased.

“With the antibodies, we have to have a prescription from a doctor showing that [the patient] is positive. Then they get four shots. After that, usually a lot of people say that they feel really good,” Dockery said.

According to Boss, a PCR (polymerase chain reaction) test is still the best test. A PCR test is much more accurate than the rapid test, with results in about 48 hours. These tests are available for free at the Colonnade in Ringgold on Mondays and Wednesdays.

Other businesses in Trenton have been affected by the Omicron variant in various ways, such as worker shortages, and the subsequent supply chain issues.

Joel Pritchett, Food Outlet manager, says that the supply chain issues are the worst that he has ever seen.

“People have less help just like we do, so they’re not making as much product,” Pritchett said, noting that at the moment there were eight employees out sick and/or quarantining.

Pritchett continued, “It has been tough, but we are fortunate, because we are not corporate, so we can handle things differently.”

Pritchett noted that there have been a variety of shortages, including canned biscuits, dog food, chips, and fruit drinks, but the worst is the canned biscuits, which the store hasn’t carried enough of in about a month.

According to David Bledsoe, owner of the McDonalds, the lobby of the fast-food restaurant had been closed for six days last week, before reopening on Friday, Jan. 21.

“We closed the inside because we had too many people out sick, and to limit our exposure. We have been short staffed since 2019. We’re just dealing with it however we have to deal with it,” Bledsoe said.

Boss believes that COVID-19 will become an endemic infection disease, much like the seasonal flu.

“It may be something that we will have to accept and learn to live with. We continue to learn more and more about COVID. Two years into it, you’d think we’d know everything about it, but science continues to change,” Boss said.