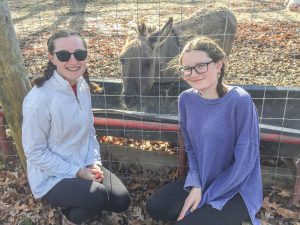 REBECCA HAZEN/Dade County Sentinel
Josee and Jordan Biddle, along with their family, own Clyde the miniature donkey. Clyde will be in the TUMC drive-thru Nativity on Sunday, Dec. 5, from 5 to 8 p.m.

The Trenton United Methodist Church (TUMC) will host a drive-thru live Nativity scene on Sunday, Dec. 5, from 5 to 8 p.m., featuring many local citizens and animals.

Attendees will remain in the car for the live Nativity, which will start at the Gross parking lot, and proceed down E. 2nd Street.

This is the first year that TUMC is putting on a drive-thru nativity. The church had hoped to have one last year, but it was cancelled because of the pandemic. The church has had a live manger scene in the past, but never a full drive-thru event.

“We want to invite the whole community,” pastor Dennis Flaugher said. “It is a way for us to tell the story of Christ in a way that the community can enjoy, and that is what Christmas is all about.”

Visitors will get to see Mary and Joseph on the way to Bethlehem to pay their taxes, as well as soldiers and a tax collector.

A bustling Bethlehem village will feature a blacksmith, a market with local vegetables, a baker, a weaver and a potter.

Of course, no Nativity scene is complete without an inn, and the manger scene. There will also be three wisemen.

Actors in the village are local artisans and Trenton United Methodist Church adults and youth. The manger scene will be portrayed by children that are members of the church.

Noah’s Little Ark petting zoo, from Chattanooga, will also be at the live Nativity, with their various animals such as llamas, alpacas, goats, sheep, ducks, chickens and donkeys.

Clyde, a local Dade County miniature donkey with quite a local following, will also be featured at the live Nativity.

Raised by the Biddle family, Clyde is about five years old, and he loves being around people.

“We got Clyde at a stockyard. We already had miniature cows, and we needed a donkey to protect the cows,” Jordan Biddle said. “For one of my school projects, we had to give back to the community in a way. It was end of the year, finals time. I asked to bring my donkey to school as animal therapy. He was a big hit. We want to get him involved in more things because he was so good at the school.”

“We’ve got an Instagram page (miniminimoore) for Clyde and for the cows. It has 100 followers, and you would not believe the amount of people that come up to us, asking us about them,” Josee Biddle said. “We live on a loop and there are very few people that live on the loop. The amount of traffic that has started to come through is crazy.”

Clyde is what is known as a Jerusalem donkey, which means that he has a dark pattern on his back and across his shoulders that looks like a cross.

“I hope it puts a smile on everyone’s face and makes them think about what Christmas is really about,” church member Dottie Abercrombie said.