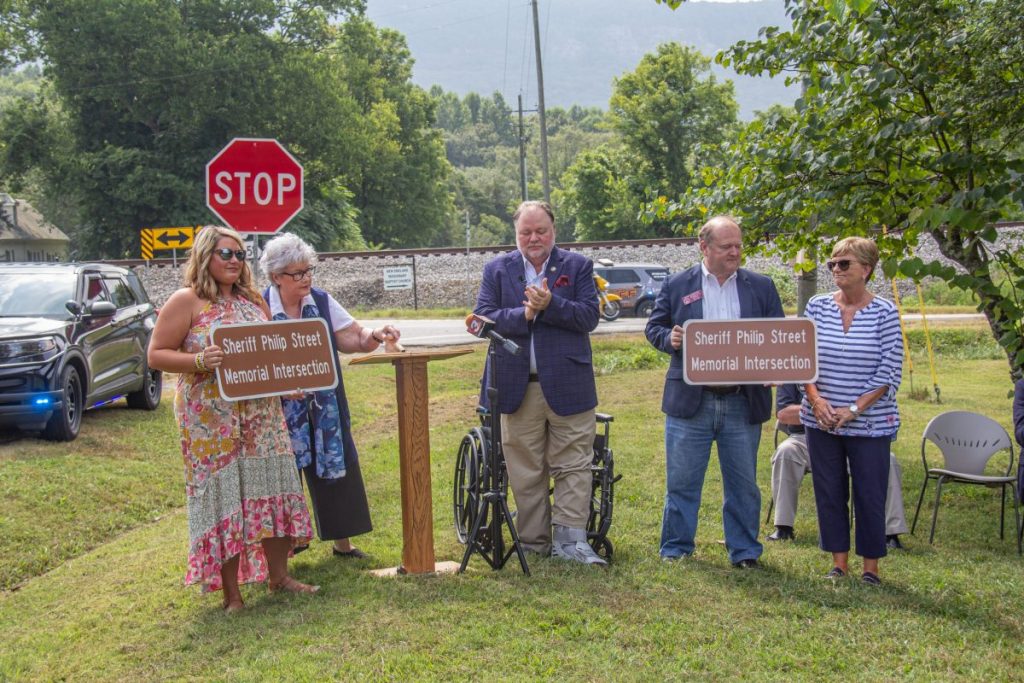 REBECCA HAZEN/Dade County Sentinel
PHILIP STREET HONORED Family members are presented copies of the memorial street sign for former Dade County Sheriff, Philip Street. From left to right: Philip Street’s daughter, Jordan Powell, sister Donna Street, Senator Jeff Mullis, State Representative Mike Cameron, and Philip Street’s wife, Sherry Street. The intersection of Highway 11 and Route 299 was dedicated to Street on Monday, Aug. 9. “We wanted to commemorate an area that was near and dear to him, the area in which he grew up in. It is my honor. We miss him today,” Mullis said, who helped to pass the legislation for the renaming. “Philip, I’ve known him almost all my life. When Philip came in, this county had one sheriff, and we were lucky to have a few deputies. You’ve got to look at what he accomplished. He did build a jail. He led us into the future from that era. He was not only a good sheriff, but he was a good person,” County Executive Ted Rumley said. “I see a lot of old friends in this group. Philip would be tickled to see every one of you. We would like to thank you for naming this intersection after Philip. We thank you, we love Dade County, Philip loved you, and we appreciate you for coming today,” Donna Street said. County and city commissioners, law enforcement, community members, and family members were all in attendance of the dedication.