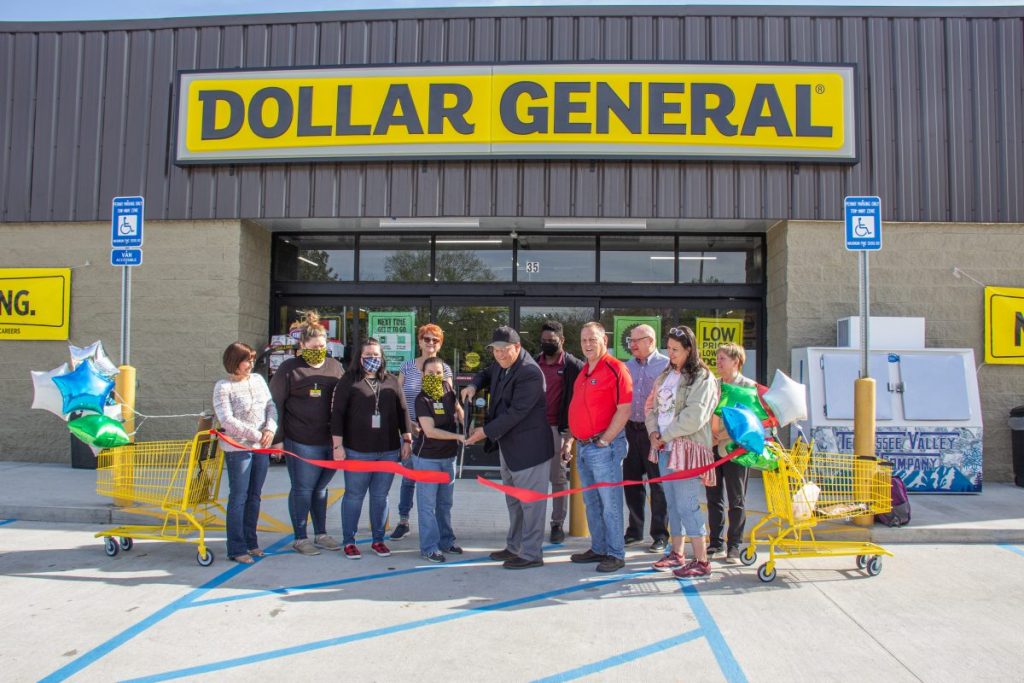 The newest Dollar General in Dade County held its grand opening ribbon cutting Friday, April 9, and has been open since March 21.

Rumley welcomed everyone and related the history of the site. Goff, who grew up on Sand Mountain, spoke to how important it is to have a store in the community, and thanked Dollar General.

“This is a special day here on Sand Mountain,” Rumley said. “The community and [Commissioner] Phillip Hartline worked on this for a long time to find a place to put this store here on the mountain. It was about a year process. When you see Phillip, pat him on the back, and all the other commissioners that were involved.”

“We want to thank Dollar General for coming to this part. We’re just a stone’s throw from Alabama. This will be welcomed to all the people in this area. This is a dear place to me. This is my old stomping grounds,” Goff said.

Dollar General Corporation has been delivering value to shoppers for more than 80 years. Dollar General helps shoppers Save time. Save money. Every day.® by offering products that are frequently used and replenished, such as food, snacks, health and beauty aids, cleaning supplies, basic apparel, housewares and seasonal items at everyday low prices in convenient neighborhood locations. Dollar General operated 17,266 stores in 46 states as of February 26, 2021. Learn more about Dollar General at www.dollargeneral.com.

The Alliance for Dade is a 501(c)6 non-profit organization powering the Chamber of Commerce and the Regional Visitor Information Center in Dade County. The Alliance is dedicated to promoting business and tourism, enhancing economic and community development, and serving as a catalyst for improving the overall quality of life in Dade County. For more information visit https://www.alliancefordade.com or Like Us on Facebook at https://www.facebook.com/AllianceforDade.