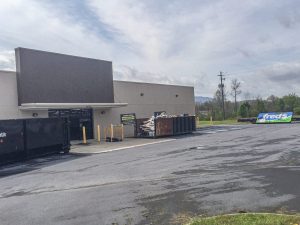 REBECCA HAZEN/Dade County Sentinel
Workers are busy turning the old Fred’s building into a Dollar General Market, including removing the Fred’s sign from the front of the building. Workers have 30 days, from March 29, to turn the keys over to Dollar General.

A Dollar General Market will open on 11858 S Main St., in the building that was originally Fred’s.

According to County Executive Ted Rumley, the Fred’s building has sat empty for about two years.

“Fred’s built the new building and everything was great. That was one of the more money-making stores that they had, they told us,” Rumley said.

The chain filed for bankruptcy in September 2019 and all of the Fred’s stores were shut down.

“That was a company decision. It was not because the store here was not doing well. They had just built this building not long before that, and there were also eight or nine new ones they had just built,” Rumley said.

There were inquiries about the building from various companies, including Tractor Supply, but the size of the building was never right.

“I have been in one to see what it was like. It’s kind of like a mini Walmart. It’s a general merchandise store, just on a larger scale,” Rumley said.

According to Rumley, he has been involved in two conversations regarding the future of the current Dollar Generals.

“From what I understand, they are going to close one, maybe both of them. I don’t know which one. It stands to reason,” Rumley said.

The people working in the building have 30 days to finish, which started on March 29, at which point they have to hand the keys over to the Dollar General employees. From there, it will take a few weeks to stock the shelves. An opening date is not known at this point.

With the addition of this Dollar General Market, and the possible closing of an established Dollar General, there will be six in the county. An additional store is being built out in Hinkle, near the Dade County line.

“It keeps people in the rural counties from driving so many miles. Someone knows what they are doing. It may look crazy but they do their homework before they build a Dollar General,” Rumley said.

Rumley continued, “From our standpoint, it’s more revenue. It’s more of your SPLOST money. It helps the people.”