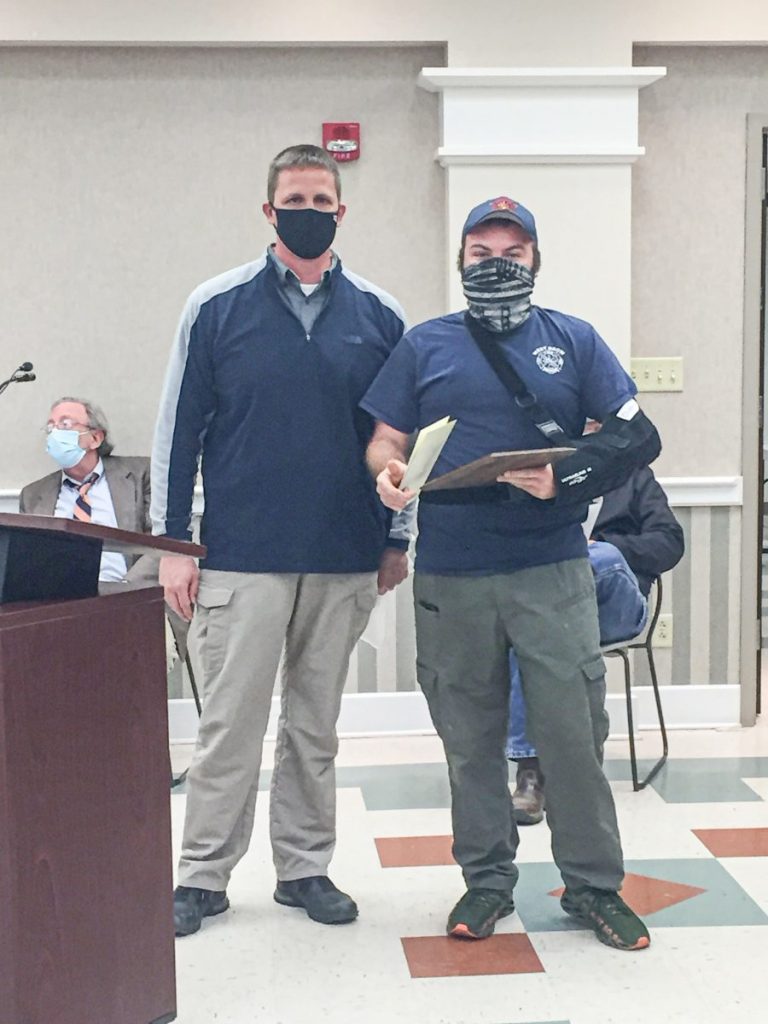 In September the fire department attended a pressurized container class at the Georgia Public Safety Training Center in Forsyth.

Smith continued, “Suggs Gas donated a whole truck, which was 2,800 gallons. We used 650 gallons that night, no questions asked. They didn’t ask for anything. They offered that if we ever needed it again, to just give them a call.”

Also at the meeting, William Pullen Jr., from the Dade County Water and Sewer Authority, spoke to the board about requesting SPLOST funds for the water line project on Slygo Road.

“The creek is eroding the bank and is exposing the water line. The line is broken in several places and residents are without water,” Pullen said.

The authority obtained a $150,000 grant and has purchased several acres of land on Slygo Road that would allow them to have the right away to reroute the water line. The project would cost $145,900 after grant funds are applied. The authority asked for $145,900 in SPLOST funds to complete the project. The board approved the amount.

The board also approved scene LED lighting for fire trucks for Trenton, South Dade and Davis Fire Departments. This will help with fire and rescue operations at night. The total is $24,403.61 and will be covered with SPLOST funds.

The board also heard from Alicia Juhl, from Henderson, Hutcherson and McCullough, about the County’s audit. Juhl reported that the County had a clean report with no findings.

The board approved a resolution designating the county’s Four Fields recreation area, located within the Dade County Sports Complex, as “Larry Moore Park.”

Commissioner Philip Hartline asked that the resolution be put to a vote. The resolution passed 3-1, with Hartline voting against.

“He grew our county budget. There was at least five ball fields on Sand Mountain at the time,” Hartline said. “Nothing against Mr. Moore. I feel strongly and I just don’t agree.”

The board also approved the CHI Memorial ambulance services contract, which will become effective Feb. 1.

Hartline reported that the sports complex is going through routine maintenance. The bathrooms are being painted and windows will be put in.

According to Hartline, school baseball will start in February, and there will hopefully be softball tournaments in March.
Commissioner Allan Bradford reported on County Road 6.

“That is a major job. It is unreal what those guys have done, with all of the iron and concrete. If everything goes well with the weather we could be done in February or March,” Bradford said.

Vice Chair Robert Goff reminded the community that the Motor Vehicle Services state office would be closed from Jan. 13-18 due to a system update. There will be no vehicle registration or titling services available.

Goff also gave an update on Ted and Diane Rumley, who are both recovering from COVID-19.

“He’s feeling better. He got up and put on his boots and walked around a little bit. The fatigue is hitting her. According to Ted, that is one of the worst things, the fatigue you go through,” Goff said.

“He has 31 years of service, just with the city of Trenton. He served for several years with the county under Sheriff Street. He is very excited to step up,” Case said.

Marshana Sharp, with the Dade County Public Library, reported that the library has added one late night to their schedule, and will now be open until 7 p.m. on Tuesdays and Thursdays. There will be an art exhibit at the library starting Jan. 23, featuring old banners that used to be displayed around Trenton.

Jane Dixon, representing Alliance for Dade, Inc., thanked the community for everyone who helped contribute to the Light Up Trenton event.

“We gave plaques, and I have never seen people so happy … something that meant thank you,” Dixon said.

The Alliance for Dade is starting a new event called Chamber Chat. The Alliance will chat informally with different businesses, which will give the community an opportunity to learn about the businesses.

The Alliance for Dade will partner up with the Optimist Club this year to hold the annual Oratorical Contest, which will all be held over Zoom.

The Alliance for Dade holds its Zoom meetings on the first Tuesday of every month at 6 p.m. Everyone is welcome to join. There is a link to join the meeting at alliancefordade.com.

William Back, Executive Director of Dade County Economic Development, reported that Dade County has held it’s ranking of Tier 3, which is a proclamation from the governor.

“The rankings are based on benefits that the state allots to companies that are expanding or moving to a particular county. For example, the state gives $1,250 to companies every year for bringing in an employee in a Tier 3 county,” Back said.

According to Back, there are roughly 35 counties in Tier 3 status. There are 18 that are higher in Tier 4.

“This means that we have a good work force. We are part of a rapidly growing Chattanooga work force,” Back said.

The next County Board of Commissioners Meeting will be Feb. 4.

Former Woodhaven Site Will Be Transitional Housing For Ministry

City Alcohol Sales Will Be Decided On By Voters